A day in the life of Big Country begins and what a day it is… Back to Barrowland, Glasgow, Scotland. It’s a very foggy drive through the city and I feel a stir in the pit of my stomach as we pull up outside the venue and it’s famous sign. 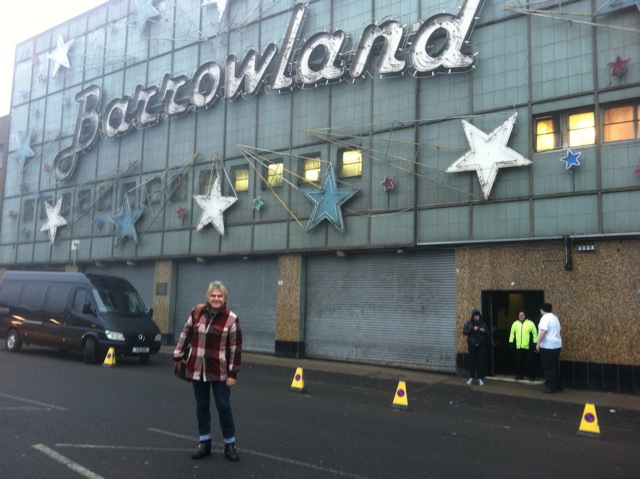 Some Big Country fans are about already and we shoot some shots before getting inside. 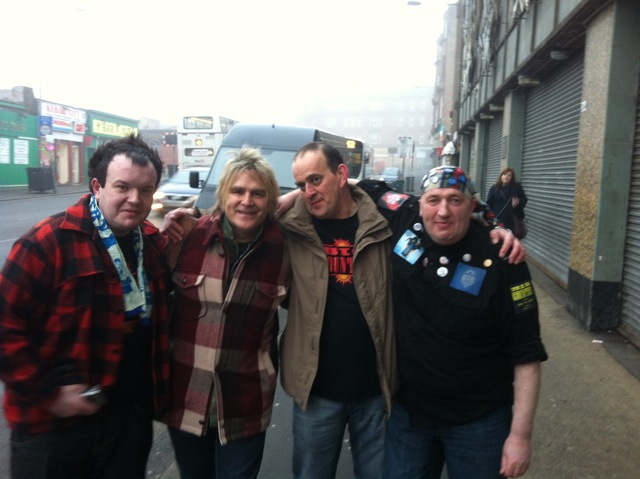 The friendly staff show me in through the front door, the way the audience will enter tonight and I steal a moment for myself beside the Barrowland sign on the floor that every fan must pass to get to the famous sprung floor on the top floor of one of the greatest rock and roll venues in the world. 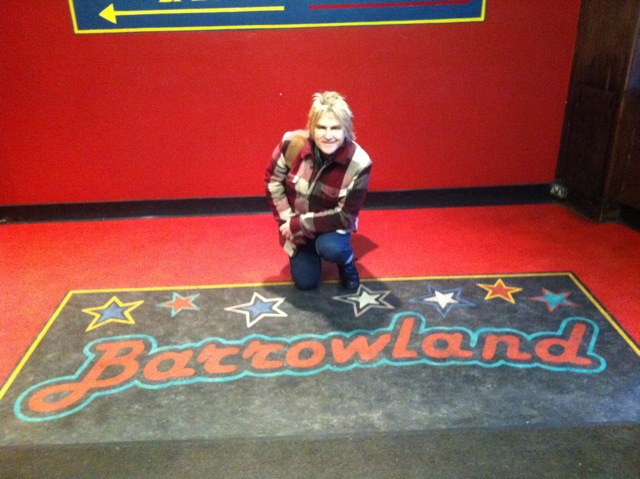 I drop my bag and stage gear in the dressing room and then head to the production office to sort out my guests for the evening. The guys from DF Concerts who promote the shows are great and so organised and friendly whether your playing Tuts, T, or now the Barras. This is the pass of passes for tonight’s show. This one will get you on to the stage and beyond. 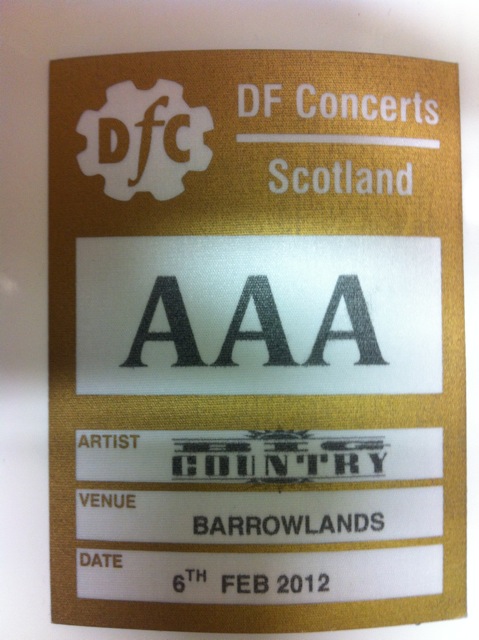 This diary thing is catching on and I grab Bruce for a couple of pre soundcheck shots in the famous ‘star’ dressing rooms. 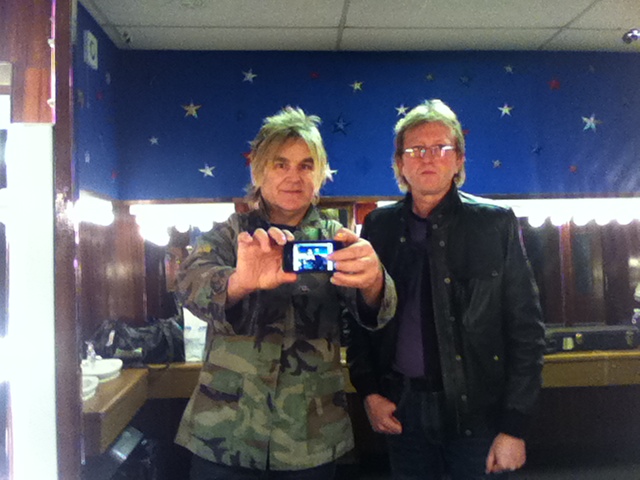 This place has seen them all and I mean ‘them all’….. I first played here with The Alarm in ’85 and was here when Stuart Adamson played his last British Big Country gig with the band back in 2000 (at which he wore a Mike Peters T-shirt on stage……). It feels a bit like I’ve wandered into the headline band’s dressing room tonight, such is the power of the memory of that last night with Stuart. It’s a strange sensation as his presence is still everywhere on record sleeves and T-shirts in the crowd. Sometimes I see people in the audience who really look like Stuart and that brings on the strangest of all the sensations, especially when I’m singing what are for the most part, Stuart’s words. The mirrors that reflect these shots are the exact same mirrors Stuart would have looked into when he last played here in 2000…. “I took my past out for a ride along the North Sea, all my demons in the back seat….Too many, too many, too many ghosts”… Lets’s go to the soundcheck shall we!!! 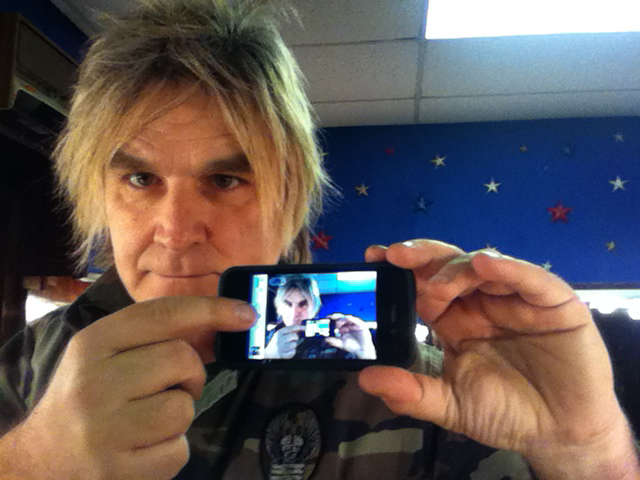 What a drummer… what a drum kit!! 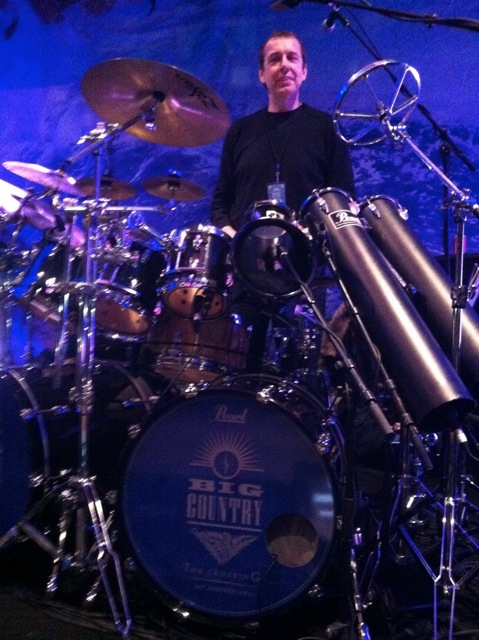 This drum kit will be propelling the fans as they jump to the beat on top of the sprung Barrowland dance floor. It doesn’t move while I’m stood on it but when 2200 people come in tonight it will move under their feet and in rhythm with the band. 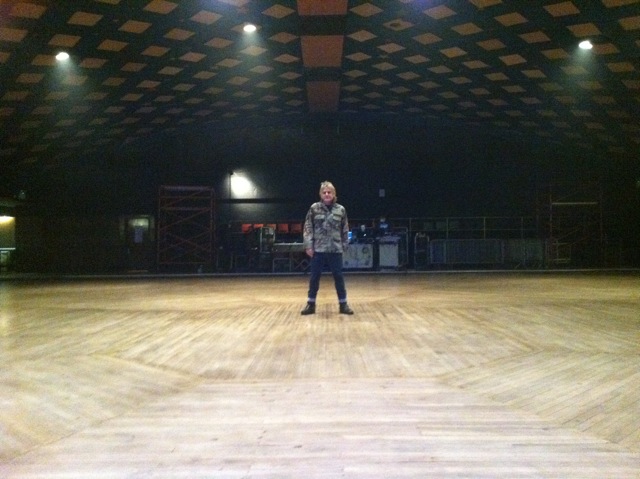 I head outside into the street to have my picture taken with the Barrowland sign all lit up and meet some lovely people who are braving the cold Glasgow night air and the fog to get in the front row. 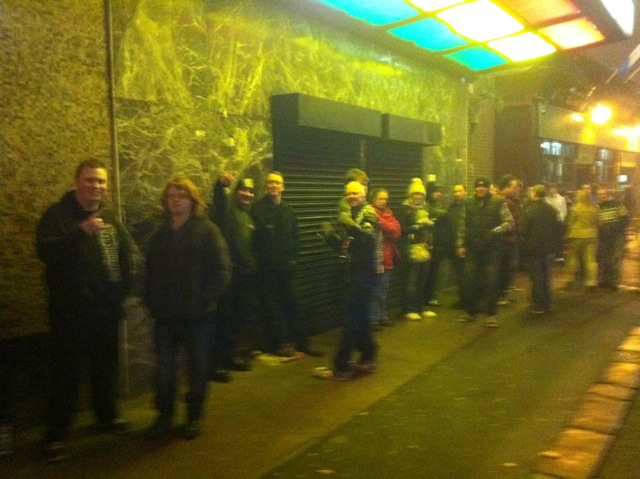 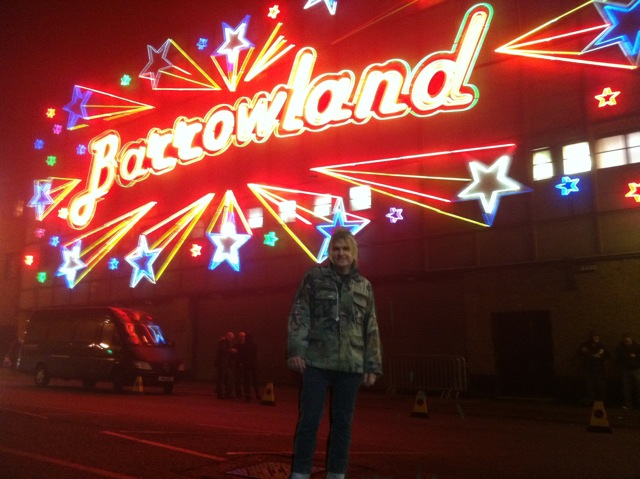 I get to meet Tada outside who has flown all the way from Japan for this and also some fans from Italy, Scandinavia, Germany and North America. I’m expecting one or two Scottish folk tonight also… 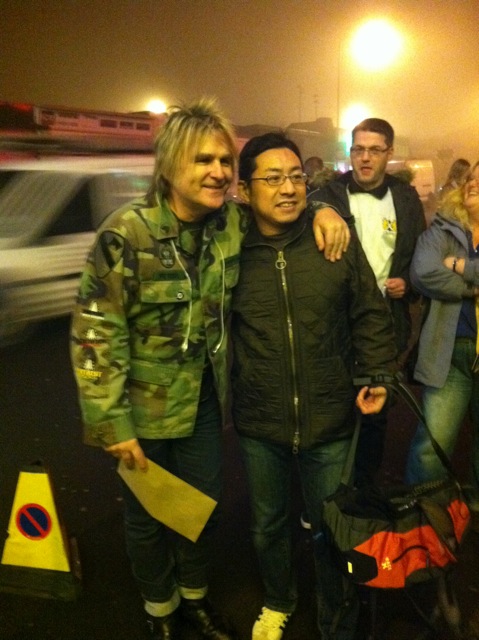 I’m escorted back into the venue by Chris who is in charge of the front of house staff and it feels like it’s going to be ‘one of those’ nights tonight… all the 1000 stars are lining up nicely. 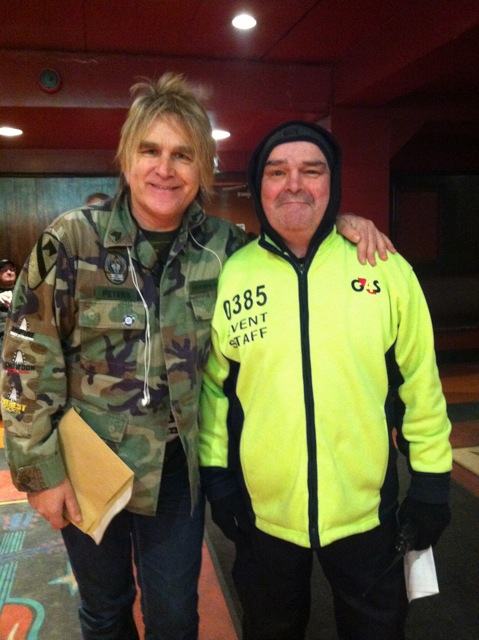 Back in the dressing room Mark ‘the mod’ Brzezicki is sporting his new ‘Fred Perry’ shirt that he describes as ‘very Stuart’ in it’s colourings and check (like the drum sticks also..) 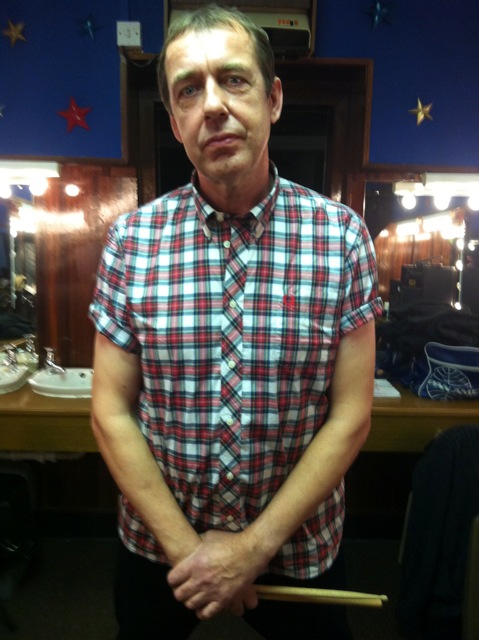 Mark repays the honours and snaps me in my ‘gear’ and we are soon at the side of the stage and huge band hug as the intro tape plays and then we climb the steps to the stage…. 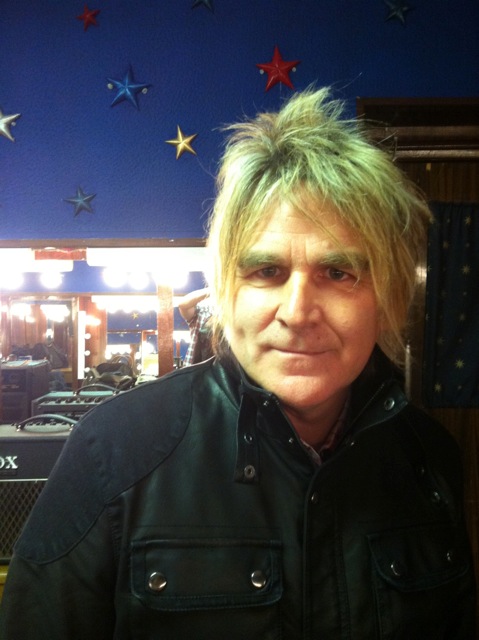 Angle Park and the gig is alive from note one. My mic stand takes a beating from the tambourine ‘Beat on blindly beat it’ as the song says. 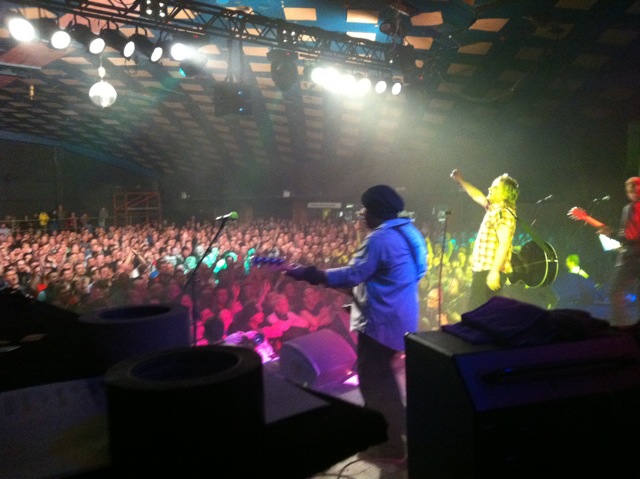 I join my mate Mark at the back of the stage for Balcony, we have a laugh as I play one beat of the drums so out of time (in the way that only a singer can!!), I’m sure I put him off his stride but he just smiles as if to say “Bloody singers they are all frustrated drummers in disguise” and he’s absolutely right. 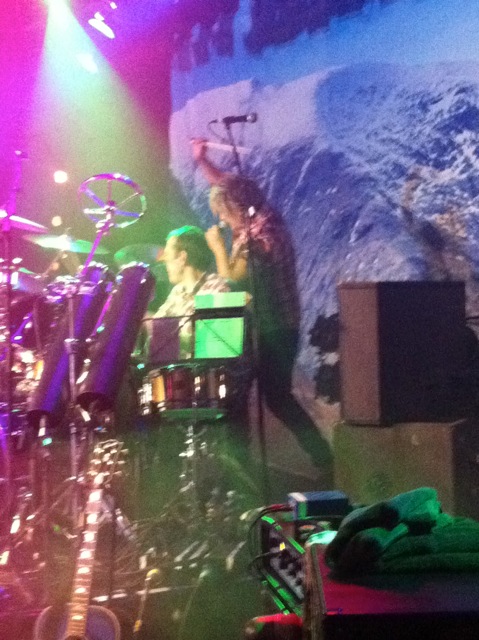 Time to go into the crowd while the united voices of Glasgow’s ‘two divides’ sing the last notes of ‘Inwards’. James Grant (Ian’s son) takes this film with my iPhone…..

Ian Grant (the long standing Big Country manager for all of it’s 30 years), comes to the dressing room to celebrate what has been a momentous evening. 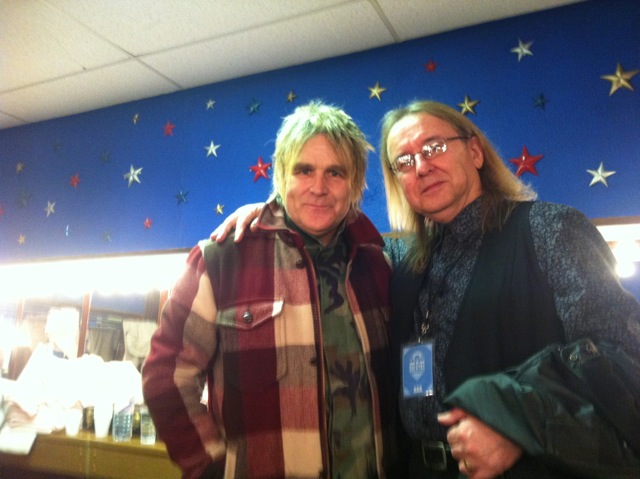 Here’s Mark with the Stuart Adamson shirt that got thrown up onto the stage for him to wear during the closing ‘Stay Aive’ ceremony that ends all Big Country gigs. 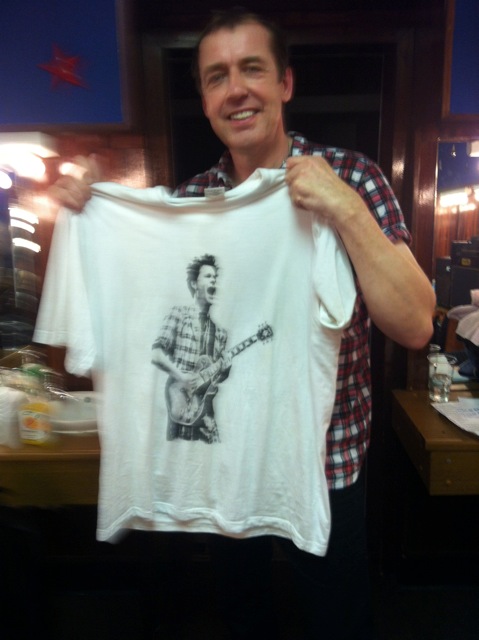 And just to show you what nice boys we are, here is a shot of Mark helping the staff to clean the floors after the show…… goodnight all!!! 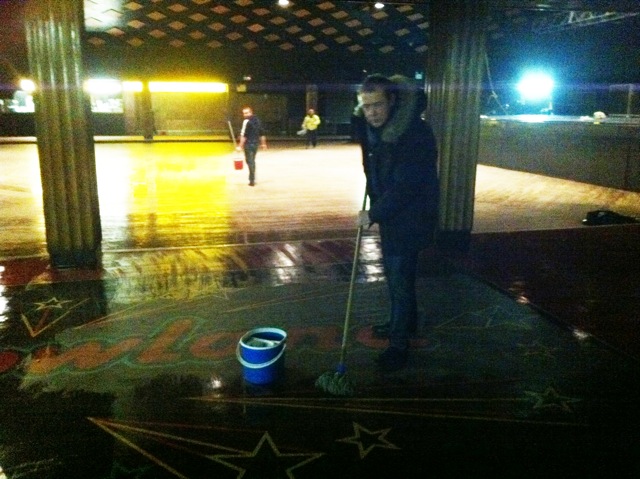