Day Seven of the By Your Side Walking Tour across North Wales began at St. David’s College, Llandudno, with  garden party atmosphere created between students, teachers, parents and hikers.

High on the hill above the lush green lawns the college choir and band performed gospel based arrangements of great songs including Stevie Wonder’s ‘I Wish’, coupled with a powerful version of Love Hope Strength to set everyone on their way. 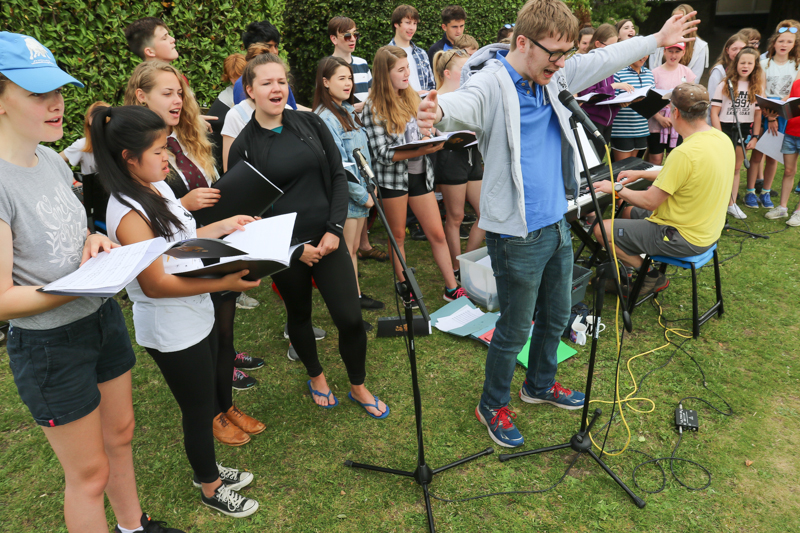 Kirsty Thomson of Awyr Las and Mike Peters spoke of the power of the community coming together in support of local NHS services that serve one and all in our North Wales cities, towns and villages many of which the team will have walked through this last week.

Today, the massed ranks of walkers cut up through the college and onto the hillside that lead down onto the beachfront of Llandudno, the beautifully preserved Victorian seaside town well known to Alarm fans worldwide as being the home of The Gathering. 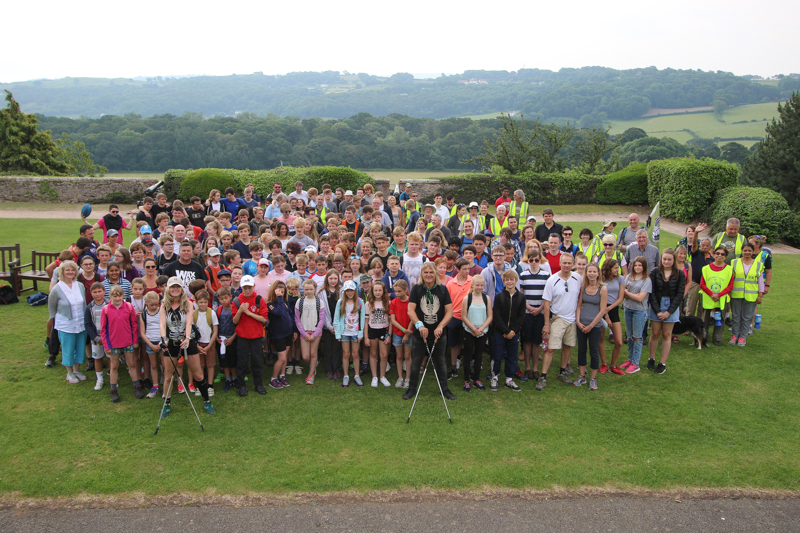 The largest group of hikers seen so far on the By Your Side Walk 2017, 400 in total, followed Mike and Jules as they trekked across the promenade towards the majestic sight of the Llandudno Pier and around the Great Orme that towered above.

It was a close, sweltering hot day, as the throng snaked its way up the steep Orme cliff side road resulting in the expected light shower of rain drops (the first since the walk began), being greeted with more than the usual enthusiasm on the climb up and over the Orme. 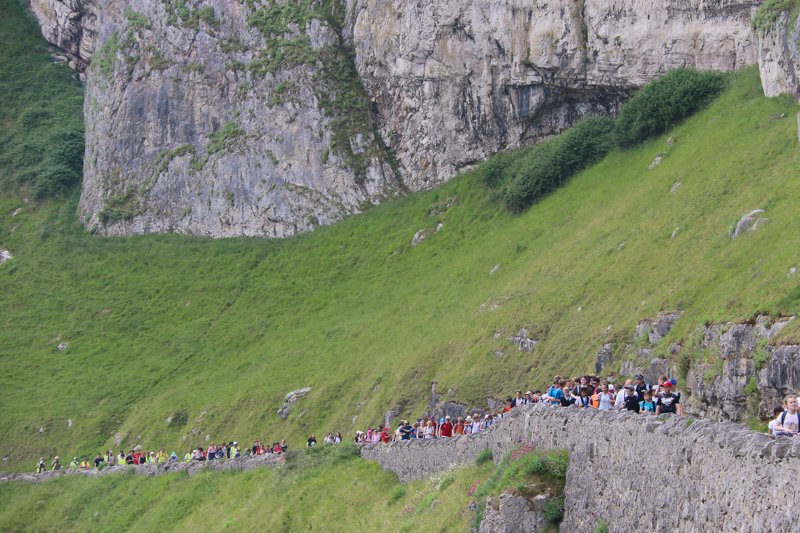 Along the way, individuals were stopping to make donations and the general feeling of goodwill towards all the walking party was infectious and spurred everyone on to the West Shore for a well earned lunch break.

The sun was now back out in force and so the Mobile PA system was set up on the lawns and Mike Peters performed an impromptu acoustic set, that turned into a brief history of The Alarm for the younger members of the walking group, some of whom are only just starting to get to know who this man is that is leading from the front and singing his heart out at each and every opportunity. 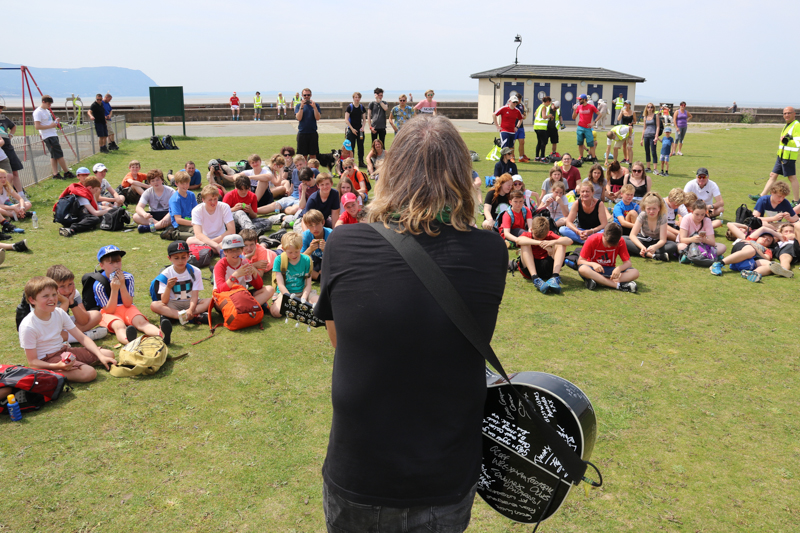 Due to the numbers, it was decided that, while the rest of the group continued towards Deganwy, Mike and Jules would make a slight diversion, to nearby Llandudno Hospital in order to address the nursing staff and patients

Accompanied by Lord Mostyn, Mike and Jules made their way in the By Your Side campaign support vehicles (provided by Halliwell Jones), to Llandudno Hospital where they were greeted by dignitaries including the Mayor of Llandudno, and other members of the hospital board, along with members of staff from the local Tesco Superstore who had been supporting the appeal with their own fund-raising effort.

Mike spoke with emotion as he thanked the nurses and members of the multi-disciplinary team that had cared for Jules from the outset of her breast cancer treatment cycle that had begun almost 12 months ago. It was here in Llanduno, that Mr. Khatak – the caring surgeon featured on the ‘Mike and Jules : While We Still Have Time’ BBC documentary, first broke the news to the couple, that in order to live and recover, Jules was to have surgery, chemotherapy and radiation treatment.

Mike and Jules thanked the staff as one, and praised them for their dedication to service that had enabled Jules (and Mike as carer), to stand before them with cancer in check, and a new life ahead of them. 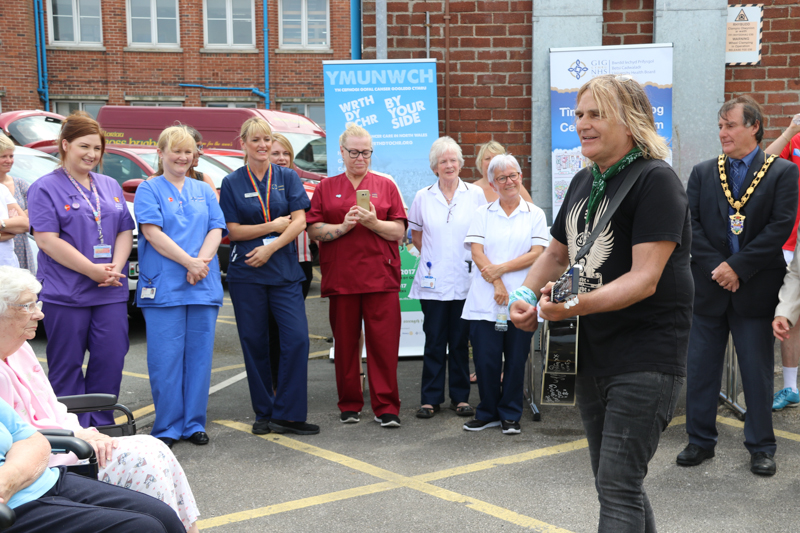 If there was moment that symbolised what the By Your Side Appeal stands for, then this was probably it. Mike and Jules stood side by side with nurses and doctors who had created the opportunities for them both to live and so in turn, create the circumstances that have enabled both to come back in person to the place of their lowest low and say thank you, and with the whole of the rest of their lives ahead of them,.

Mike and Jules rejoined the trek and the path continued around the head land to be greeted by the magnificent site of the ancient Conwy Castle. To enter the town, everyone had to walk in the shadows of the Thomas Telford suspension bridge and down, into the harbour where live music was being played at the Liverpool Arm’s Public House looking out over the estuary. 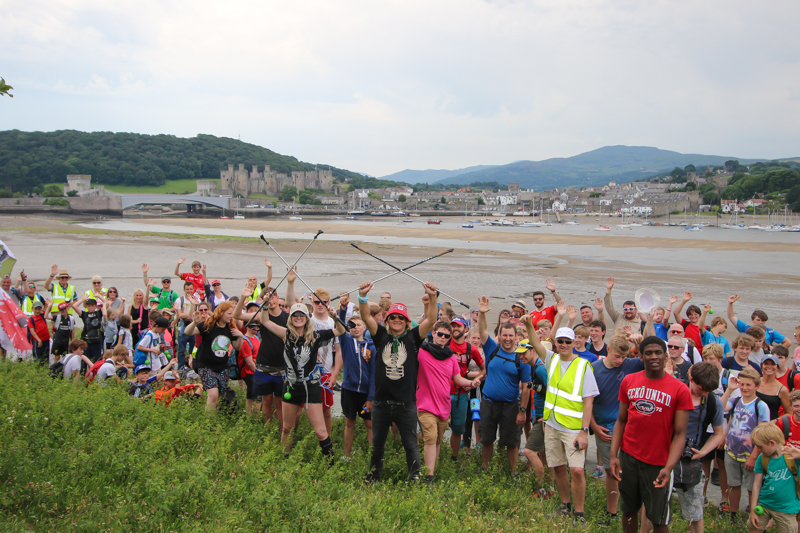 A grand finale was performed with all the assembled school choirs joining in with Mike Peters to sing ‘Knocking On Heaven’s Door’ – the Bob Dylan song that transcends generations and known to all. 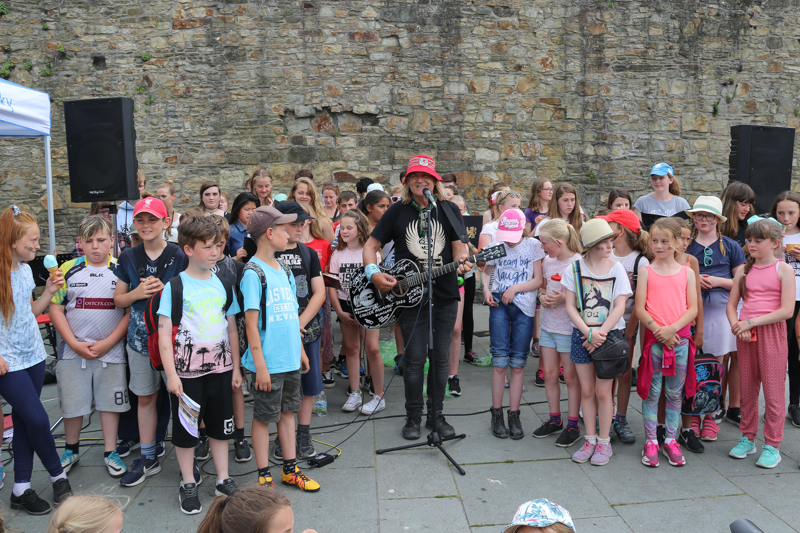 The sun shone and good will spread all around.

Day Eight will continue form Conwy and on to Bangor in Gwynedd before finishing in Anglesey / Ynys Mon at the village of Menai Bridge.