I am proud to announce that a new Big Country album – ‘The Journey’ will be released next week on April 8th (Cherry Red) in the UK and April 30th (Sony Megaforce) in the USA. In fact, the lead track ‘Hurt’ is available to order from iTunes UK as of 1st April.

‘The Journey’ contains 12 songs which all feature a full writing, playing and singing contribution from myself along with founder members Bruce Watson (Guitar), Mark Brzezicki (Drums) with Bruce’s son – Jamie Watson (Guitar) and Derek Forbes (Bass).
It has been a labour of love from start to finish and after all that has happened to Big Country in it’s 30 year history, it would have been easy to say “no” to the notion of making a new record, but as a cancer survivor and someone who was inspired by the words “Stay Alive” from ‘In a Big Country’ that symbolise what Big Country is, was and always will be about, I chose to say, “yes”. Therefore, I am very proud of the contribution I have been able to bring to this great band that I have known and admired since meeting for the first time in 1983. 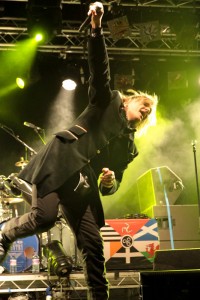 ‘The Journey’ has already received some excellent reviews (see below), and Rolling Stone magazine in the USA premiered ‘Hurt’ on it’s website

www.rollingstone.com
There is also a huge Big Country tour (UK, Europe, USA), on the horizon. Beginning on April 12th at the ABC in Glasgow (the exact same venue where my modern day journey with Big Country began on December 31st 2010), so a fitting place to begin the world tour. Full tour dates (with more to be added soon), can be found here at www.bigcountry.co.uk
The complete track listing for ‘The Journey’ is as follows:
[Act One]
In A Broken Promise Land
The Journey
After The Flood
Hurt
[Act Two]
Home Of The Brave
Angels And Promises
Strong [All Through This Land]
Last Ship Sails
[Act Three]
Another Country
Return
Winter Fire
Hail And Farewell
You can hear extracts from the album and see a track by track by track interview with myself and other Big Country members over at the official Big Country website www.bigcountry.co.uk
I hope all Alarm fans will follow me on this Journey.
Stay Alive and dream aloud with love, hope and strength,
Mike Peters
The Journey – Big Country
“It’s an album about hope and redemption,” says Bruce Watson. And from the opening chords of anthemic opener In A Broken Promise Land – a nod, stylistically at least, to Big Country’s early days when the songs he and Stuart Adamson conjured up felt like the equivalent of a Molotov cocktail being lobbed into the midst of ‘80s pop – it’s impossible to ignore the spirit of optimism that burns brightly throughout all 12 tracks of The Journey.
This is the sound of a band being reborn. Fired by those trademark duelling guitars and Mark Brzezicki’s meticulous drum work, The Journey is a tour de force that buzzes with excitement. Though it’s been 14 years since Big Country last released an all-new studio album (just edging Bowie’s decade-long hiatus) it’s a triumphant comeback that feels more like a creative peak.
Through love and loss, from hurt to healing, the songs themselves – like the blazing title track, say, or the aptly-named Return – connect with both the band’s extraordinary past and (on After The Flood or the gorgeous lilting groove of Strong, for instance) deliver a blueprint for what’s still to come.
“It’s a document of a band bereaved but not broken,” insists Mike Peters. And though his voice, at times, sounds uncannily similar to Adamson’s, the golden thread that connects this version of Big Country with those wide-eyed dreamers who first stormed the charts on both sides of the Atlantic back in 1983, is sewn much deeper.
Hurt, for instance, blazes with the kind of quiet intensity that Adamson and Watson first trademarked on The Crossing. In spirit, it’s a successor to the heart-stopping Chance while the brooding Winter Fire seems to draw its inspiration from the most memorable moments of Steeltown, say, or No Place Like Home.
But the album stretches even further back into the band’s roots, to the glorious, adrenalised post-punk rush of The Skids too. While Big Country’s debut single Harvest Home marked the mid-point between The Absolute Game – Adamson’s last full outing with The Skids – and the alchemy he would go on to forge with his new bandmates, The Journey sees them reconnect with those inspired, rapid-fire bursts of guitar genius that influenced everyone from The Edge to James Dean Bradfield.
One of the album’s no-contest highlights, for instance, is The Last Ship Sails. It’s a dizzying rush of chrome guitars, thundering drums and drilling bass – courtesy of new recruit Derek Forbes – that may be the closest anyone’s come yet to replicating the all-out aural assault Adamson hallmarked in the early days of The Skids. And just to square the circle, it’s not Watson – who, fresh out of school, used to watch The Skids from a corner of their rehearsal room – playing that superb guitar solo, but his son Jamie.
Overall, The Journey feels like a bulletin from the rock’n’roll frontline. It’s about good times and bad times, fears and dreams. It’s about dusting yourself off and taking the next step, in spite of a wounded heart, in spite of the worst the world has to offer. It’s about the triumph of hope and, as it turns out, it’s also a three-act masterpiece that mirrors the story of Big Country themselves
Sometimes you’ve got to make the journey …
Tim Barr