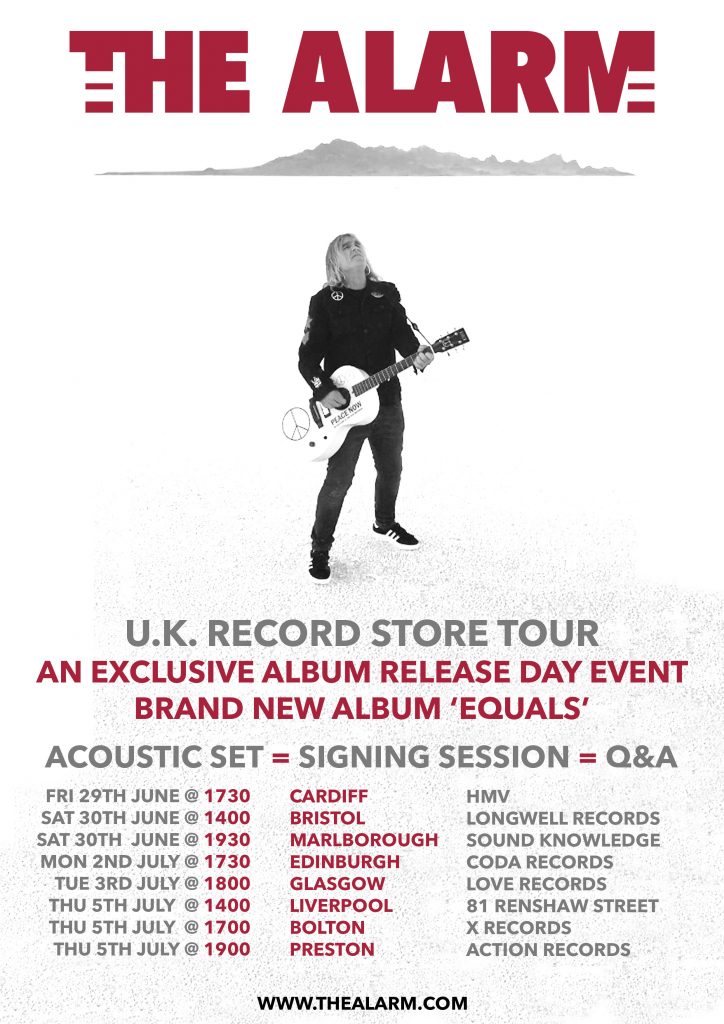 To celebrate the worldwide release of brand new Alarm album Equals, on Friday June 29th 2018, Mike Peters will undertake an 8 Date UK Record Store Tour, which will begin in Cardiff at the HMV Store, where fans will have a chance to purchase signed copies of the HMV Exclusive Red Vinyl Limited Edition of Equals. (Please note revised dates for Liverpool and Bolton which have moved to July 5th.

Throughout the first week of release, the UK Record Store Tour will see Mike Peters travel the length and breadth of the country with lots of exciting news to be released each and every day of the tour.

On Saturday June 30th, the day after the official release of Equals and the HMV In Store at Cardiff, Mike Peters will travel across the Severn Bridge into Bristol for an afternoon appearance (2pm) at Longwell Records (36 Temple St, Keynsham, Bristol BS31 1EH). Later that evening he will stay in the South of England and travel on to Marlborough to perform at Sound Knowledge Record Store at 7:30pm (109 High St, Marlborough SN8 1LT).

Events are spread far and wide and include a visit to Scotland on July 2nd for a 5PM in store session at Edinburgh’s Coda Music (2 Bank St, Edinburgh EH1 2LN). The next day July 3rd will see Mike Peters in Glasgow at Love Music (34 Dundas St, Glasgow G1 2AQ), for 6Pm session.

From there on July 5th, Mike Peters will be perform a triple header with a lunchtime (2pm) session at Liverpool’s 81 Renshaw Street (81 Renshaw St, Liverpool L1 2SJ) followed by a late afternoon (5PM), in store appearance at X Records in Bolton, Lancashire (44 Bridge St, Bolton BL1 2EG). From there, Mike Peters will take the 38 minute northern route to Preston for an evening event (7pm) at Action Records (46 Church St, Preston PR1 3DH).

Equals is available on LP and CD and all Alarm fans attending will all be able to get their copy of Equals personally signed by Mike Peters.  Everyone attending will also have the opportunity to meet and hear Mike perform up close and acoustic and take part in a live Q &A.

To proceed the tour, there will be a very special edition of the Never Let The Fires Die Podcast that will be made public on the Thursday evening June 28th prior to release date that features an extensive interview with Mike Peters discussing all aspects of Equals – before and after, song by song, that will also include a world premiere of one of the brand new Equals recordings.

The Official Alarm Facebook page will be hosting various ‘live’ broadcasts throughout the Release / Record Store Tour week, so fans from all around the world can tune in and take part in the Equals release celebrations.