As the westerlies sigh…..

On the drive down the East Coast to the city of Newcastle I can’t help but overhear a story about Steve Marriott of the Small Faces / Humble Pie told by the erstwhile Barry Mead (our Tour Manager for the ‘Crossing The Country’ tour). Barry is describing the circumstances of his own personal entry point into rock and roll when he landed a job in a music shop fixing amps and guitars for the ace face himself. From my vantage point in the back seat of the tour bus, I can hear our own ace face, Bruce Watson and Barry discussing the finer points of the guitar sound as deployed by Mr. Marriott, and I can’t help but listen as Barry tells a great story of the time when he had just finished building a mixing desk in the Marriott household studio on the day that Steve himself returned from a USA tour. Impatient to hear the sound of his first ‘home’ studio, Steve came straight from the airport and immediately put on the rough mixes of what is now known as the ‘Rockin’ The Fillmore’ album. As the deafening music filled the studio, Barry watched as Steve Marriott began to dance and sing to the sound of his own voice and throw huge air guitar shapes fuelled by nefarious white substances that were being ‘chopped out’ onto the desk and self administered to the legendary small frame of the Humble Pie singer. ‘Rockin’ The Fillmore is now regarded as one of the greatest live records of all time and Steve Marriott is playing at the ‘Fillmore’ in the sky. 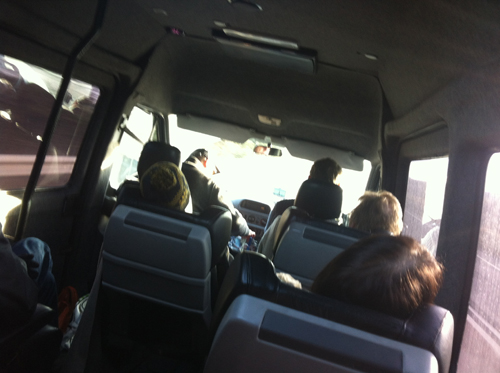 Hearing the story of another rock and roll great who is no longer with us, somehow puts me on a bit of a downer and as sleep takes hold of the two Watson members of the band, a silence descends over the vehicle. Mark B., is driving and concentrating on the road ahead, Ian is being very quiet as usual, and Debbie (Ian’s wife), is catching up on some rest as is Alan the sound man. Tony has his headphones on and is lost in the sound of ‘The Crossing’ album (as recorded at the Rak Sessions a few weeks ago), and so I make do with the view outside. 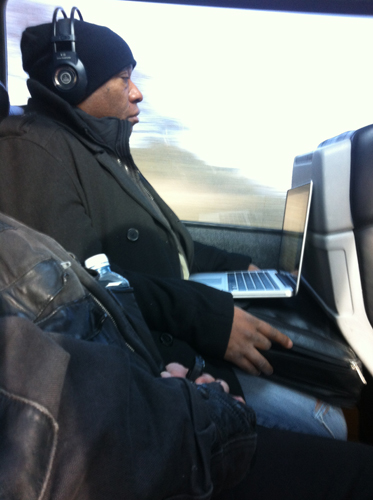 I think about what I am doing here and how did it all come to be. It seems that we have all come so far since those first steps taken in Glasgow on December 31st 2010. What a journey it has been and if truth be told, I must admit that I had no idea it would have come this far and become so big. I don’t know why, and maybe it’s a hangover from yesterday’s experience in Balmule House, but I start to think about the future and where do we go from here.

I’m sure all Big Country fans want to know what happens next and I’m no different, I want to know what’s next myself. I can honestly say most sincerely, that even I don’t know where we go from here, or how. Outside every venue people have been asking me about when will we tour next? Will there be more new music? On the walk back to the hotel in Dunfermline, two Big Country fans even asked me about a proposed ‘gathering’ style fan convention that they say has been announced on the website. I have to tell them that I don’t even know about that one either.

It seems that there is a momentum about what we are doing that is beyond our control. Events are taking us to places that some of us may not be ready for, or willing to accept yet. To me, this is the sort of moment when the best rock and roll happens, when the magic of the unknown takes over, and I start to get excited again at the idea that this isn’t being planned or thought out, that it’s the result of a natural energy being perpetuated by all concerned both onstage and off.

It’s still such a deep and profound experience to have to sing another man’s creations every night, and at times I have to admit, it gets the better of me emotionally. There are so many lines in Stuart’s work that catch me out every night as new meaning is revealed with each performance.  When I sing in Wonderland “I need the love of you”, I really mean it. Every time.

I sing it with the conviction I do, because I am now living that line every time it comes out of my mouth. I need the people around me to know that I need their love to be able to do this. I don’t want silence, I want everything to be out in the open, loud and proud, if you don’t like it tough, if you do great. Simple, honest and for real. Speak your mind and be true to yourself. That’s the message that comes back to me from Stuart’s words time and again.

I get so immersed in the music the ‘six’ of us are making that when I hear it played back with my voice on top instead of Stuart’s (at this moment, I can hear myself singing ‘The Crossing’ in the overspill from Tony’s headphones… he obviously likes to PLAY IT LOUD!),  I have to stop and ask myself does this feel right?, and right now I can say quite emphatically, that it does.

Over the years, I have learnt to trust my instinct above all else and I don’t feel guilty for saying this, but as long as I can trust the positive feelings I am having right now then there is no limit to where this new thing (that is called Big Country) can take us.

As I write, It begins to dawn on me that I am making an emotional ‘Crossing’ myself on this tour, a transition from outside to inwards, and am starting to recognise in myself that part of my life now belongs in this music as much as anyone else who has been credited for playing a part in this band. I know now, that I would be prepared to go the the ends of the earth for this group, to fight for it, to help make it stronger, to argue for it and to rise to the challenge and do what must be done. I’m reminded in this instant of a lyric from one of my own songs “I was looking for a way out when all I found was a way back in”. I’m here to stay now that’s for sure, and as my mood turns from dark to light, life returns to the tour bus and people begin to reanimate as the great city of Newcastle appears before us. 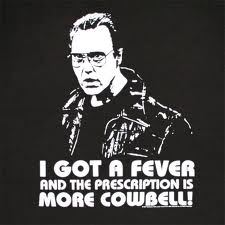 Inside the venue, deep in the dressing room below the stage and just before we are due to go on, we can hear ‘Virginia Plain’ by Roxy Music being played over the PA. Bruce remarks on the similarity to Bob Dylan in the vocal delivery of Bryan Ferry, and Tony reveals that his favourite Big Country cover was of the Roxy Music song entitled ‘Prairie Rose’. Bruce and Mark talk about their own preference for the BC cover of Blue Oyster Cult’s ‘Don’t Fear The Reaper’. Mark quite innocently talks about the version that is on youtube and says that hundreds of fans have left messages in the comments section saying “Not enough Cowbell, Mark!” and again quite innocently he says “But I don’t know what they mean, because there’s loads of cowbell in the mix!”….. “I know”, say Tony and Bruce, “what exactly are they on about?”.

It’s at this moment that I now realise that not one member of Big Country is aware of the ‘More Cowbell’ Saturday Night Live comedy sketch starring Christopher Walken and Will Ferrell, that has been watched by the entire population of the planet…. except Big Country….. ‘More Cowbell’ is put into the search engine of the laptop and Bruce Watson (not Dickinson), hooks up his portable speakers. It’s a comedy gold moment, and I wish you could all have been there watching and listening to these grown men of Big Country falling about laughing in the dressing room as the penny drops about why Bruce Dickinson says “I’ve got a fever, and the only prescription is MORE COWBELL“. 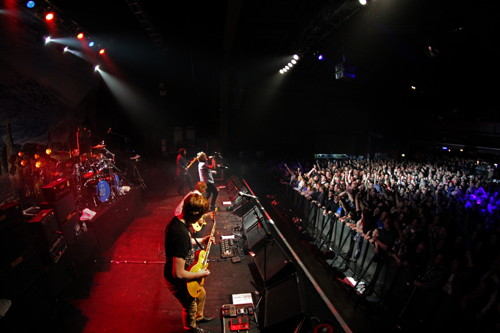 This is the vibe that carries us out on to the stage tonight at Newcastle Academy, and our band hug is climaxed with a shout of ‘More Cowbell’. (Don’t get ideas kids!!!!) over the line we go and it’s Angle Park, East Of Eden, Another Country, Balcony (with Mark ‘More Cowbell’ Brzezicki on drums). 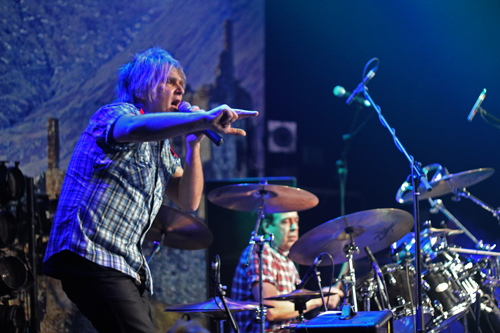 Tonight’s olympic training session to get into the middle of the crowd for ‘Chance’ involves running down three flights of stairs, through two doors and a corridor, up another two flights of stairs and a squeeze through the people who are not expecting to see the lead singer bumping into them. Just make it in time and what a view, best ticket in the house. 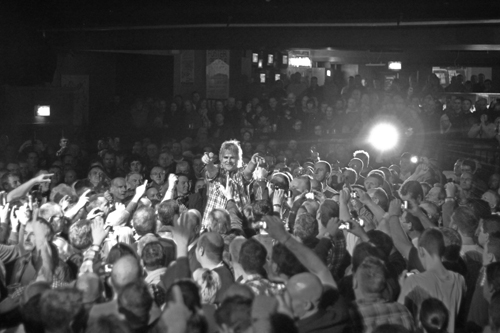 I used to do the ‘in crowd’ bit during ‘Porrohman’ on the last tour and wanted to do something different for ‘The Crossing’, and so while we were rehearsing, I spent a lot of the sessions not playing guitar but sitting down and ‘listening’ to the music. I always get an image of a burning ‘Wickerman’ when I sing ‘Porroh’ and thought it might be effective to create some sort of brooding “Night falls on the city” atmosphere that would tie the moment to the lyrics and shine an ‘Anger’ light back from the stage onto the ‘Faces’ of the crowd “Where the sun has never shone”. 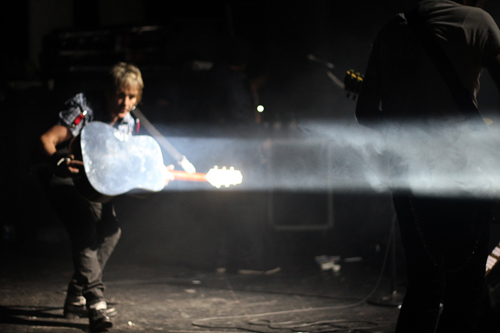 After the show, we all congregate in the hotel bar, band, crew and management. Barry Mead (with the glasses), is telling stories again, and I find out that Barry first worked for BC sometime around September 1986, and he fires off a few recollections from the Seer tour. 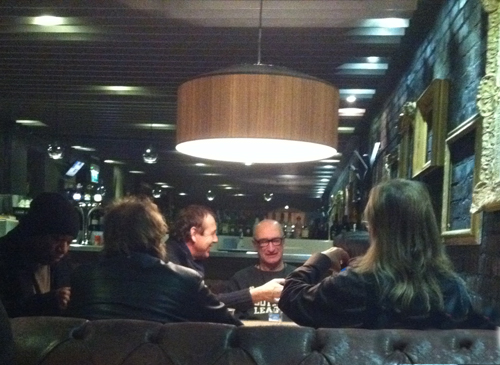 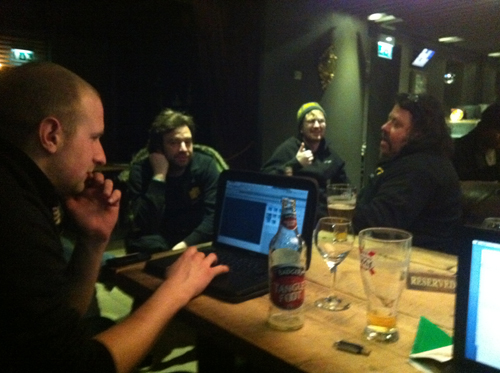 While Oli Powell edits up the photos he took from tonight’s show (thanks Oli), Ron Maningley (he with the beard on the right), tells the joke about Big Country that went around the circuit in the eighties, “How many Big Country tour managers does it take to change a light bulb? Apparently the answer is… “Nobody knows, because light bulbs last longer!”.

Will the last person to leave ‘The Crossing’ tour please turn out the lights!