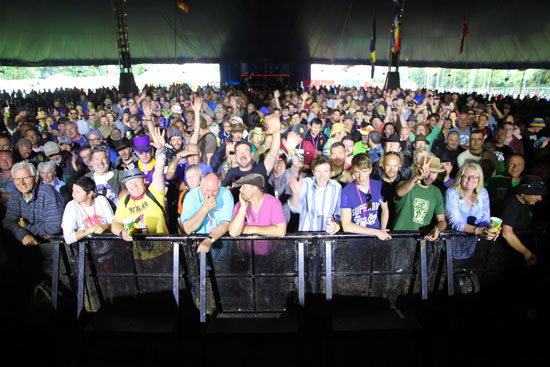 At precisely 4:25 on Glastonbury Friday, Mike Peters lead the Alarm out on to the stage to be greeted by a large and enthusiastic audience crammed into the Acoustic Field perched high on the north side of the Pilton Farm landscape. 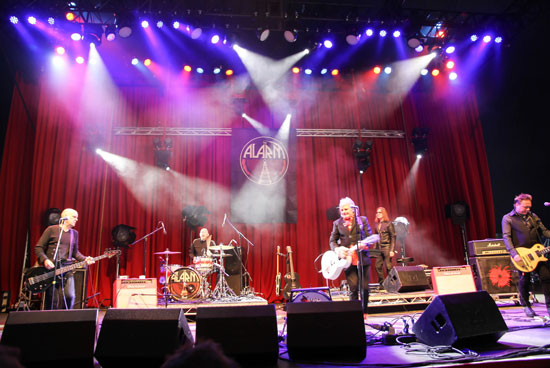 “This has been 35 years in the making -The Alarm at Glastonbury“, stated Mike Peters as the group rolled off a power chord rumble with guitars held aloft. 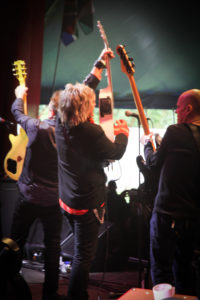 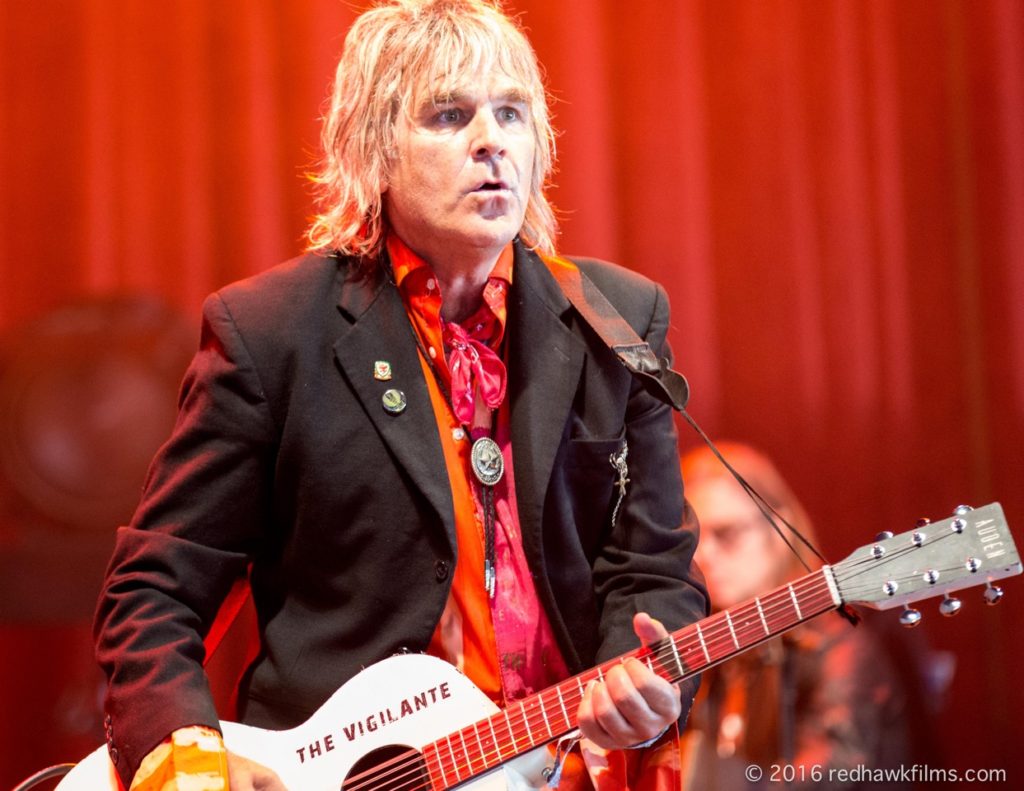 Smiley the band’s charismatic drummer kicked into the formidable drum attack of ‘Kill To Get What You Want Die For What You Believe In’ before the low end rumble of Craig Adam’s bass was added to the mix. The acoustic and electric guitars of Peters and guitarist James Stevenson stabbed across the backbeat and the psychedelic organ of long time keyboard man Mark Taylor, punctuated the rolling cross rhythms of this most dramatic opening song. 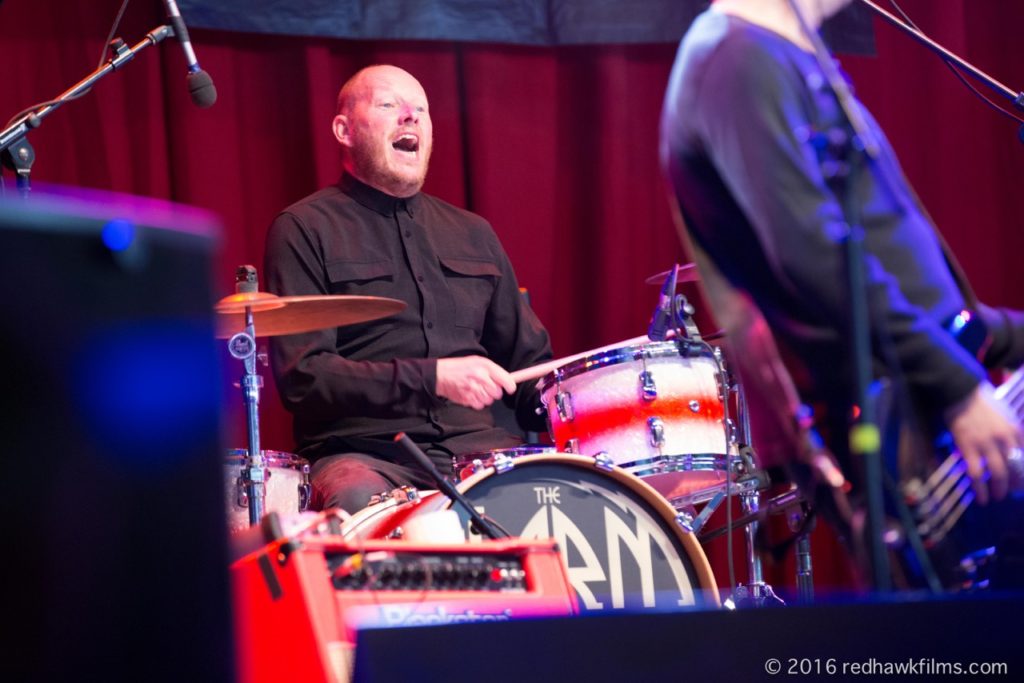 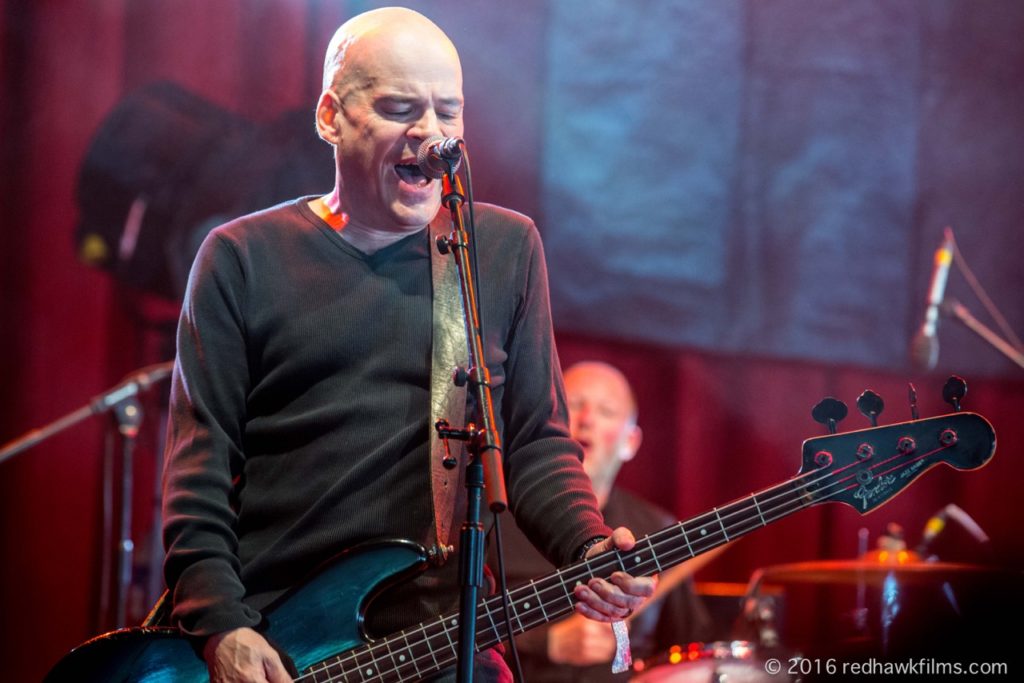 ‘Superchannel’ followed like an express train with the crowd of old and new alarm fans (you could tell them apart by the vast array of different era Alarm t-shirts), picking up on the chorus refrain that was called by the faithful and soon answered by the curious who had come to check out the band that has been quietly building a new reputation for itself amidst a surge of new interest in all that it stands for. 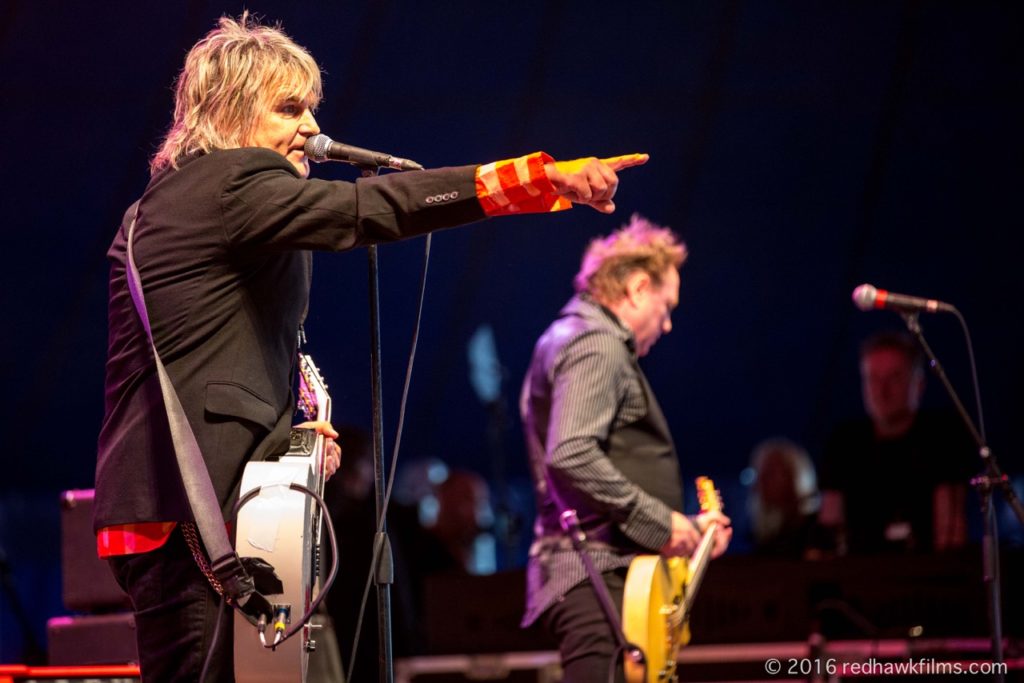 “For those who can’t be here,” was the intro for ‘In The Poppy Fields’ – a song that grows in stature each time it is played. 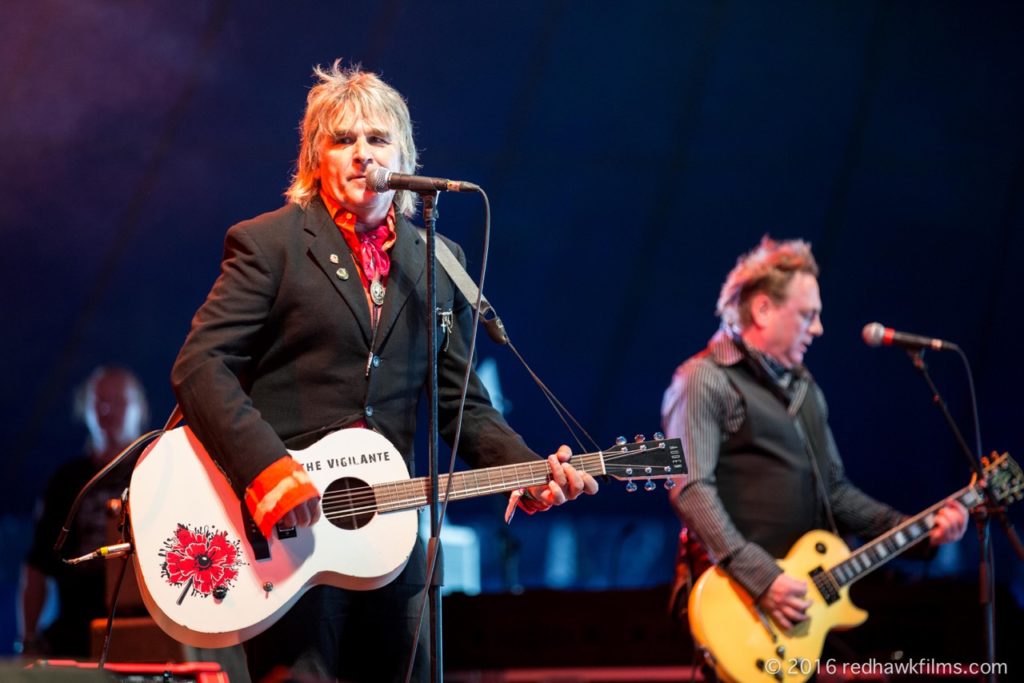 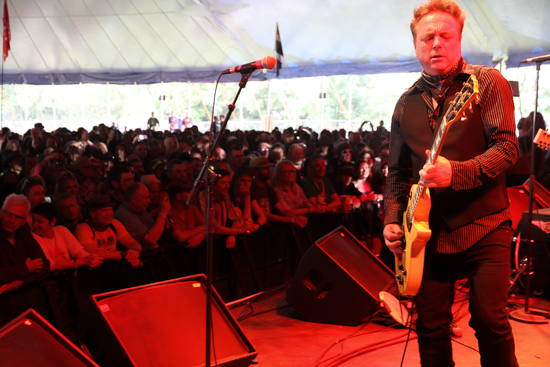 ‘Drunk and Disorderly’ was as powerful as ever, and perfectly suited to the big stage surroundings and enormity of the occasion. You don’t see drums being played like this very often, and Smiley was suitably inspired and perfectly in step with every move Mike Peters made – be it leaping from the stage risers or when making direct eye contact from front to back of the stage. 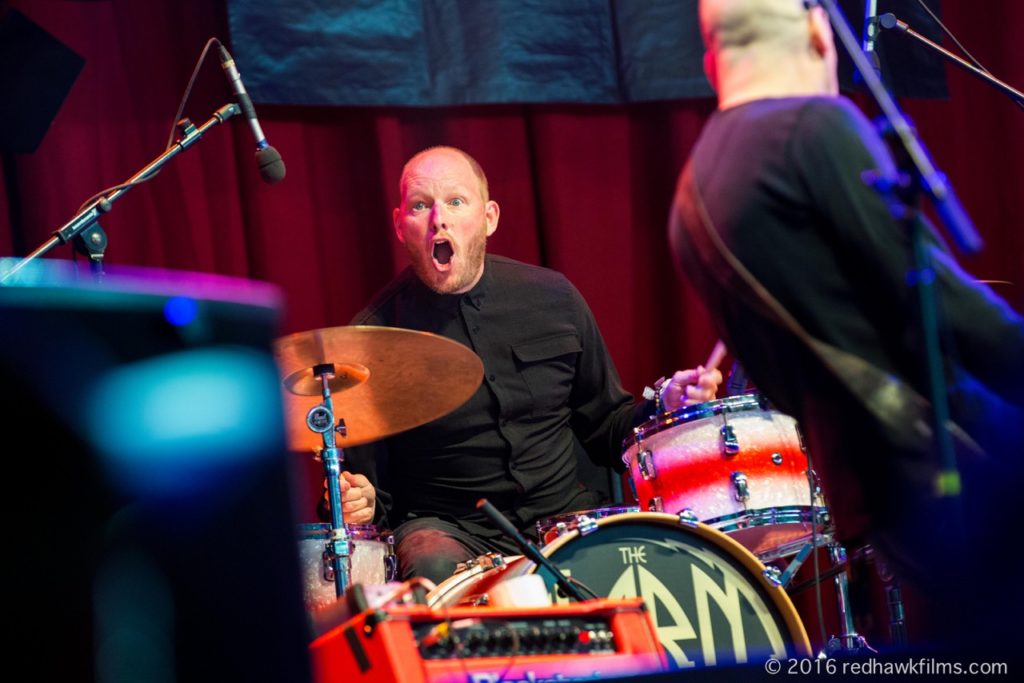 “The true story of the ‘Sixty Eight Guns'” followed, with Peters teasing out the first two verses before allowing the band and audience to explode into life at the first chorus. It was an outrageous version that served as the springboard for an emotional and thrilling finale. 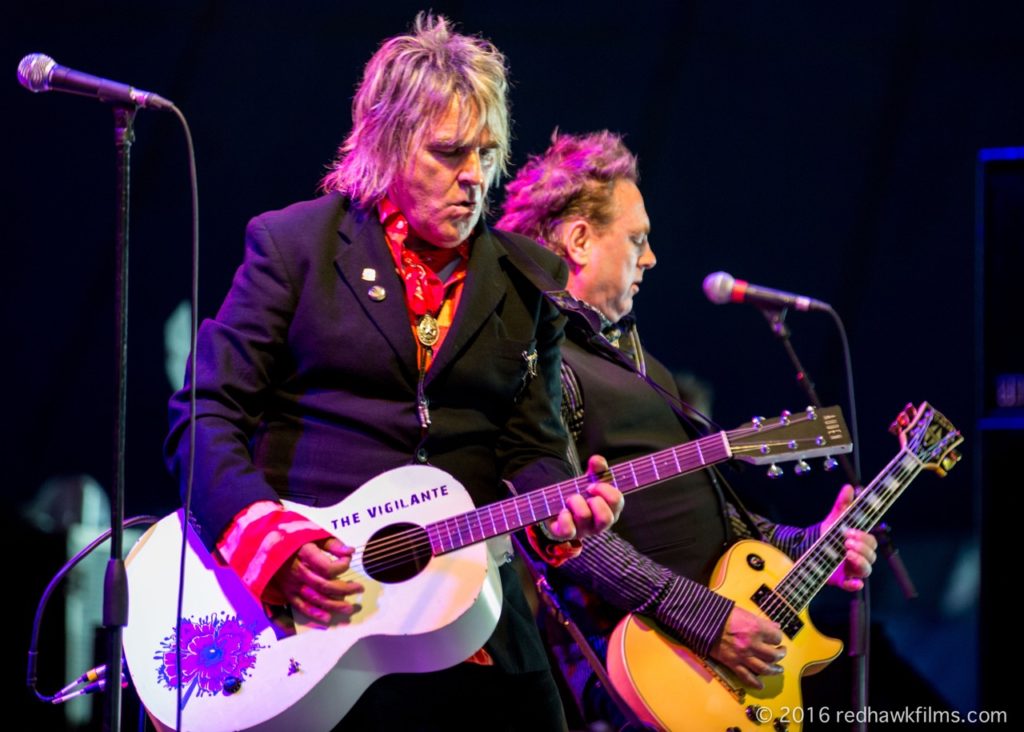 ‘My Town’ had the entire festival crowd singing the chorus and almost drowning out the band in the process.

The sound was as good as you could hope for in a festival setting and the ‘Spirit of ’76’ saw every hand held high, all the way through the domed tent structure to those watching from the sidelines. 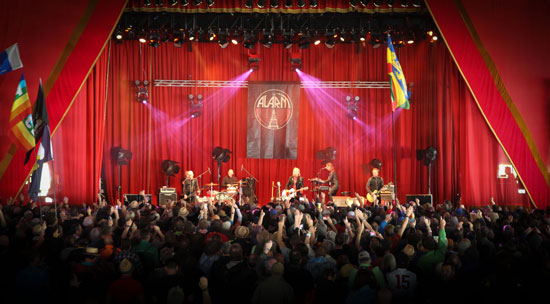 ‘One Guitar’ with its infectious hooks closed the set and as the band trooped off the stage, the refrain of Blaze Of Glory rang out from the audience and almost as soon as it had begun, it was over. 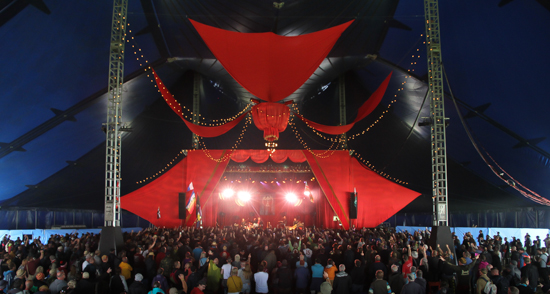 The Alarm had given their all and were rewarded with the biggest crowd of the day at the Acoustic Field and left us with the sense that their best is still yet to come.

Photos on this page by Andy Labrow and Scott Rosenbaum © Redhawkfilms