IRS Records had signed a new distribution deal with MCA while The Alarm were recording Strength and just before the release dates, manager – Ian Wilson and IRS Records CEO Jay Boberg went to MCA’s headquarters in Los Angeles and made a presentation of the ‘Strength’ single to the head of the MCA Record Division – Irvine Azoff and the head of MCA’s radio promotions division.

“The response was not great and certainly not what Ian Wilson and Jay Boberg hoped for, as both Azoff and the head of radio promotion did not think that the song could be a hit and decided to put their resources into other bands / artists signed directly to MCA. It meant that we only had the in-house IRS team working the record to radio and press. It meant we faced another uphill battle with limited resources.” – Mike Peters

‘Eddie Macdonald came up with the idea of using the big church like organ intro for the 12″ extended ‘power’ mix and album version of ‘Strength’ (Ironically, using the Fairlight synthesiser machine as used on ‘The Chant’ sessions), but because we had rushed the first mix to get the 7″ out quickly, the video and single (that initially went to radio in the UK), featured the lone guitar chord / vocal beginning. I think things might have turned out a little different if we had been able to use the big organ intro all the way  through the campaign, as it sounded great on American radio when they were playing the album mix and the big organ sound came bursting out of the speakers.” – Mike Peters

September 9th 1985 Strength the single released in the UK and USA. 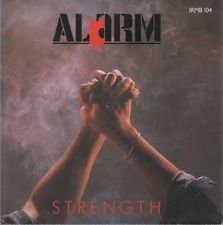 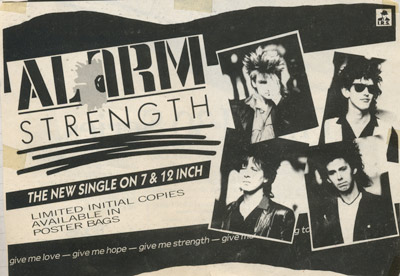 “The Strength single was the perfect song – heartfelt lyrics, delivered with an anguish with which you could completely empathize, a high tempo thumping backbeat and an insistent, masterful riff. The absolute definition of a classic song in my book. Pure genius – and one of the few songs I never think to turn down out of consideration for others when sitting at traffic lights – I WANT people to know I have such good taste! .”
– Gary Overington, TheAlarm.com Co-Web Master 1996-2002

“Fast paced, with echoing guitars, organ, and a pounding rhythm, “Strength” shot The Alarm back into the limelight, reaching #40 on the UK singles chart, but more importantly, #61 in the USA, the highest they had ever reached. The UK and USA 7″ of “Strength” was b/w “Majority,” a song pointing the Alarm’s “finger of guilt” back at themselves asking just who they thought they were. Another version of this single, with a poster cover was released in the UK. The UK 12″ single included the “Strength(Power Mix),” “Majority” and an acoustic version of “Absolute Reality.” In the USA, only a couple 12″ promotional singles were distributed. -Steve Fulton, Goldmine 1995

The “Strength” single was backed with “Majority”, re titled from “We Are Majority” , with different lyrics than version performed earlier in the year.

“The title song from The Alarm’s new I.R.S. album, Strength, is a trifle disarming, really. At first the tune sounds positively restrained compared with previous Alarm songs — which perhaps explains its considerable radio and MTV play. Eventually, however, you realize the song possesses the British band’s usual melodic pound and vigor, as well as its ability, like U2, to focus on societal ills while at the same time gamely seeking a way out: “I don’t know if I’m living or dying . . . Give me love, give me hope/Give me strength/Give me someone to live for.'” – Lennox Samuels, The Dallas Morning News – Sunday, November 17, 1985 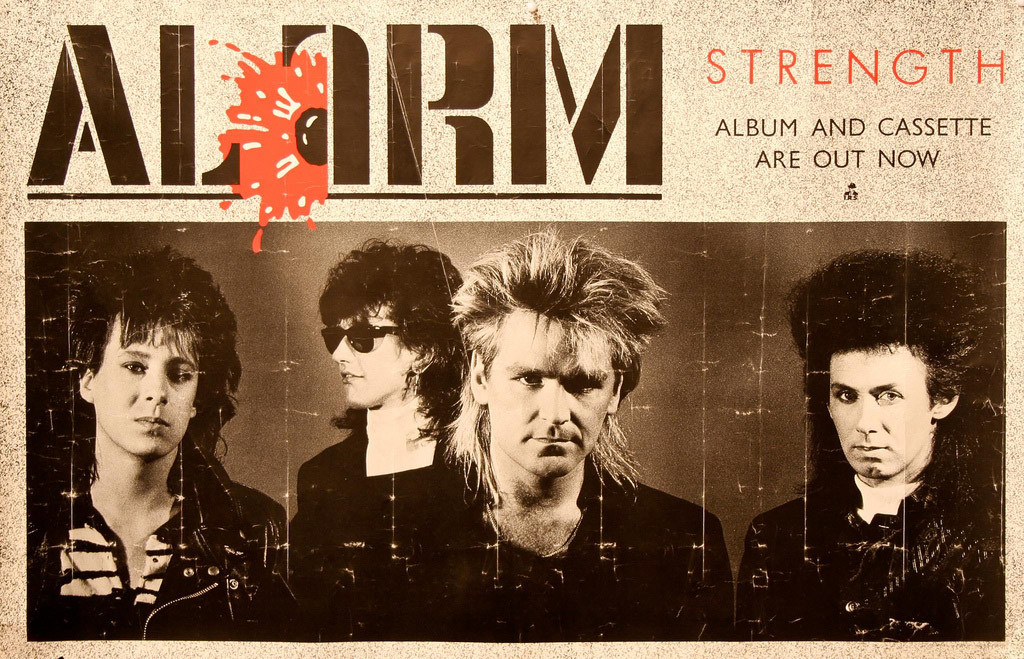 The Strength album was released in October of 1985. Embracing the “poppy” symbol once more, it appears several times on the album cover and sleeve. Beyond symbolism the album contained a batch of great songs. Two of the best were later released as singles, “Knife Edge” and “Spirit Of ’76,” but other gems were not. “Deeside,” “Father To Son,” a newly recorded version of “Absolute Reality” and Mike Peters’ “Only The Thunder” shine with crisp guitar and driving rhythms. Eddie Macdonald shows his own song-writing talents on “The Day The Ravens Left The Tower,” inspired by a flu-induced stupor he found himself in one night. The album also included The Alarm’s first self-proclaimed love song, “Dawn Chorus.” The UK version of Strength deleted the new version of “Absolute Reality.” A limited edition picture disc of the album was simultaneously released in the UK. The album reached #40 on the UK album charts, but was bested by it’s showing in the USA where it hit #39. -Steve Fulton, Goldmine 1995 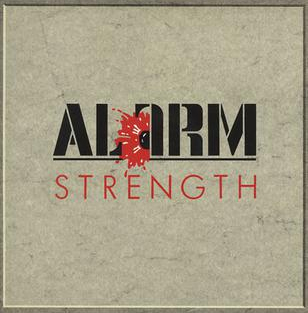 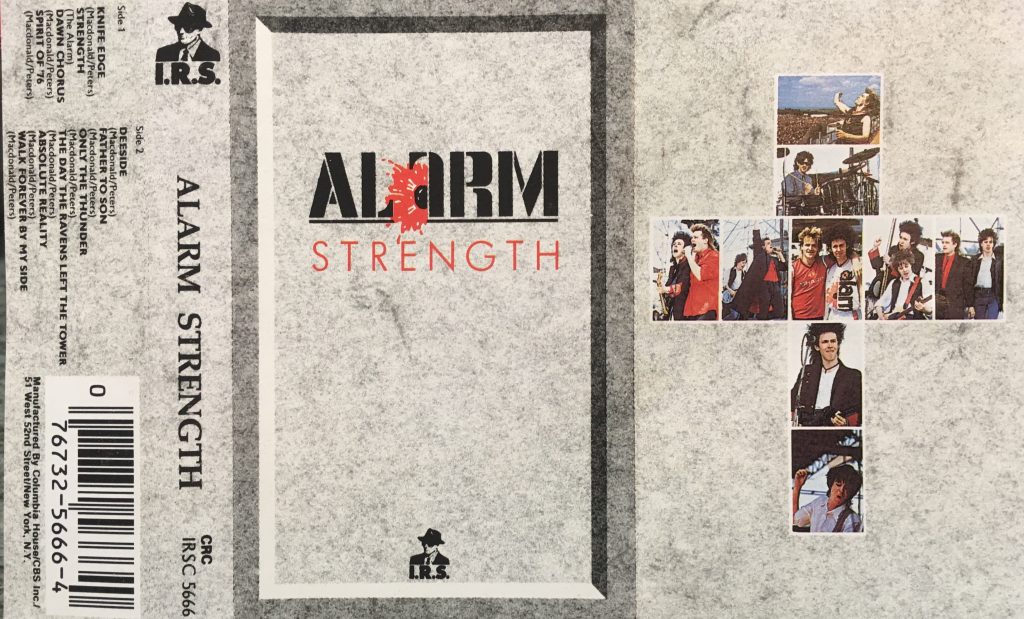 In this audio clip, Mike Peters describes the process of making the Strength album, the Absolute tour, and how they decided on the songs for the album.   This interview was recorded just as the album was released.

“One song after another, “Strength” rocks, pleads and dares with fresh, edgy playing and swirling arrangements. Vocalist Mike Peters goes over the top in places. In a world of so many bogus “bands” and manicured recorded product, “Strength” is the best and most important rock album I’ve heard in a long time.” – MARTY RACINE Houston Chronicle – Sunday, December 8, 1985 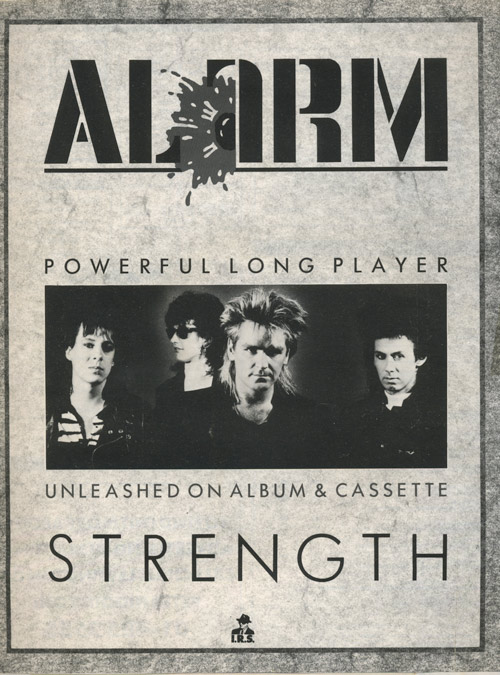 “If the title song is a relatively slow build, the rest of the album for the most part is the sprawling, raw Alarm sound fans remember from earlier anthems such as 68 Guns. During Knife Edge and Dawn Chorus the emphasis is on the powerdrive, with David Sharp’s incisive guitar adding bite throughout” – Lennox Samuels: The Dallas Morning News – Sunday, November 17, 1985

“The band’s influences, predominantly the Who, Bruce Springsteen and Tom Petty, are still obvious. But this time, those songs are the exception rather than the rule. In its music and lyrics, the Alarm is finally developing a voice of its own.” – Divina Infusino  San Diego Union, Wednesday, November 27, 1985 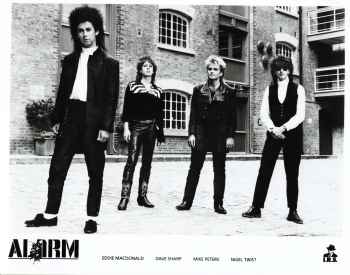 “The sheer size of the sound and the sweep of the music is evidence of the maturity and sureness Peters and Macdonald have acquired. And guitarist Sharp is a revelation. His work shows all the visceralness, if not yet the lyricism, of the Edge’s efforts. The Alarm will be in concert Nov. 23 at the Bronco Bowl, with Beat Rodeo.” – Lennox Samuels: The Dallas Morning News – Sunday, November 17, 1985

“As Rupert Black (who had played piano on the Strength album sessions), was committed to The Pretenders, we needed to find a new keyboard player to come out on the road with us starting with a secret gig at the Marquee in London. I was at IRS Records UK Headquarters in Notting Hill Gate one day, and Steve Tannett (Alarm A&R Man), was playing ‘Strength’ really loud in his office. The keyboard player from IRS Recording Artists The Lords Of The New Church came up to me in reception, and said that he would “love to play on the new Alarm tracks one day”. I said, “As luck would have it we need a new keyboard player for the Strength tour”. It turned out to be Mark Taylor who has been with the band ever since. He was just a little older than us and a bit more worldly wise and was very much a calming influence on all of us in The Alarm. He turned out to be the most amazing pianist and organ player you could wish for.” – Mike Peters 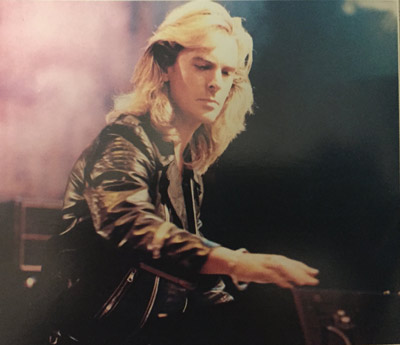 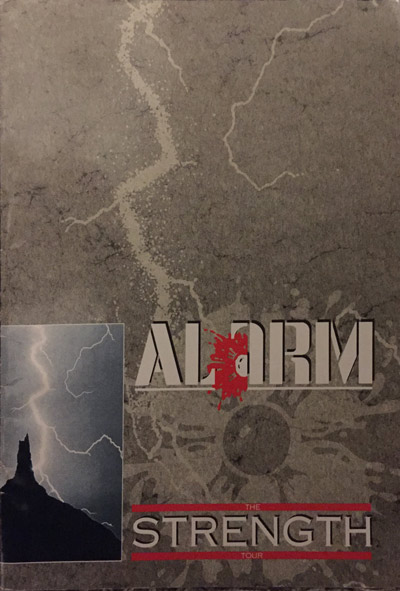