This year’s Snowdonia / Zip World Rocks got off to a flying start with magnificent weather and some 2000 people taking part across the events of the day.

Over 500 people attended the hike to Lake / Llyn Idwal at Devil’s Kitchen. The walk itself began with rousing speeches from Love Hope Strength co-founder Mike Peters and event co-ordinator Kirsty Thomson. There was an informative address from the walk director Jayne Lloyd and a general warm up for all participants conducted by Pilates expert David Earnshaw.

Throughout the morning there was music from the GhostBuskers who entertained with a superbly entertaining medley of popular songs all played against a soundtrack of ukulele, guitar, bass, tambourine and kazoo as well as unison vocal backing. Mike Peters set the walk in motion with a soulful ‘Walk Forever By My Side’ and a first of the day performance of the Love Hope Strength theme song which was sang with backing from the Ghostbuskers. 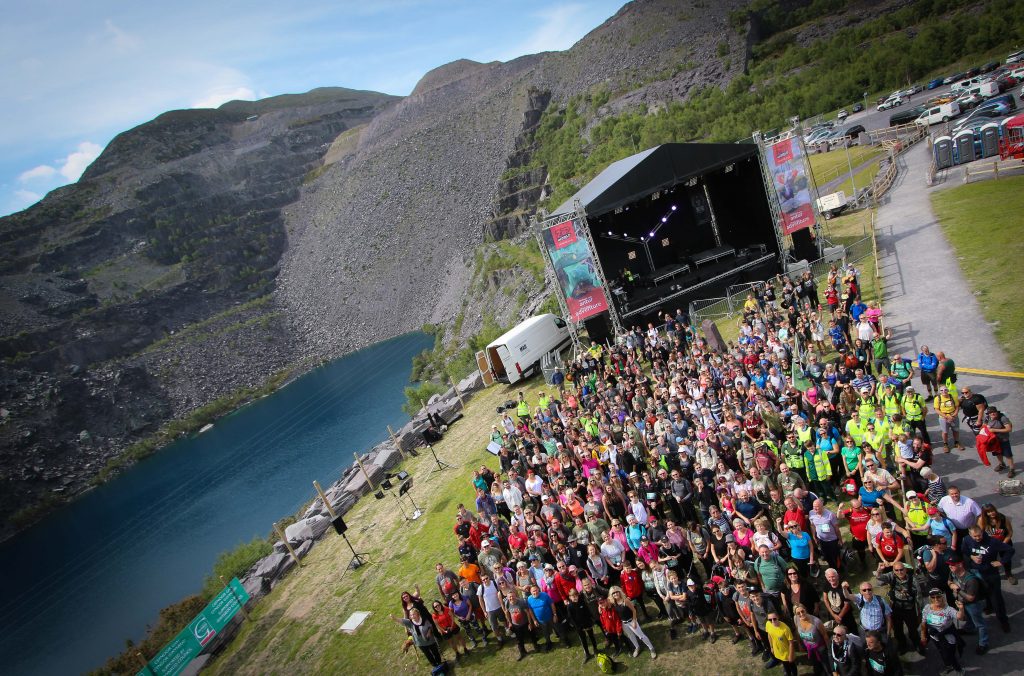 Led by Love Hope Strength’s Mike and Jules Peters together, the trekkers hiked into the Nant Ffrancon which offered as fine an example as can be found anywhere in the world, of an Ice Age Glacial Valley. At the first musical stop of the day and with the sun pouring down from on high, Mike Peters introduced cancer patients Nicola and David, who were both currently undergoing treatment and had made inspirational efforts to be at Snowdonia Rocks. Mike then called for a moments silence at this unique festival of remembrance which was honoured amongst the surroundings of a beautiful canopy of 3000 foot Welsh Mountains – Tryfan, Glyder Fawr and Fach and the towering Pen Yr Ole Wen. The absolute silence was broken by a version of ‘No Frontiers’ and punctuated with an emotional ‘Knocking On Heaven’s Door’ which saw Mike joined by Snowdon Rocks favourite Chris Summerill and other musically inclined trekkers, who had brought their own instruments and spontaneously joined in. The version featured an incredible flute solo by ‘Trekker Steve’ that superbly captured the atmosphere of the setting. 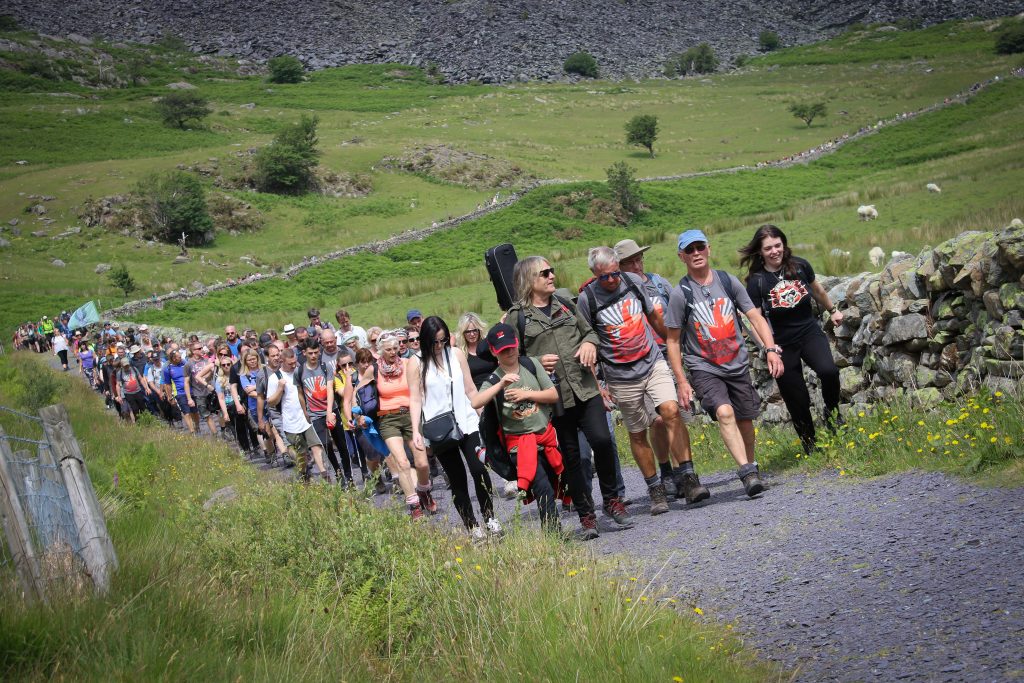 There was more music at the second stop at Hafod, with refreshments and cool drinks being provided by the local Scout Group. This time the music was more celebratory and the upbeat feeling amongst the people was captured perfectly with a breakout of the Slade classic ‘Merry Xmas Everybody’ with Welsh International Rugby Star Rupert Moon joining in the fun. This certainly put a spring in everybody’s step as the throng set off for the circular walk around Llyn Idwal and the long journey back down the roman road towards start / finish line at the Penrhyn Quarry at Bethesda.

The returning group of people were then serenaded on the final steps by the Cambria Marching Band – resplendent in Welsh Tartan and and playing a magnificent drum and pipe fan fare of Welsh Hymns and anthems that carried everyone across the finishing line of this 12.5 mile undertaking.

Music was already blasting out of the PA System as the second part of the day got underway with Zip World Rocks. It was Jules Peters who had created the partnership with Zip World’s Sean Taylor, and her vision to host the music festival here at the Penrthyn Quarry site. The stage looked magnificent against the back drop of the old Quarry and is certainly destined to become known as one of the most spectacular music venues in the UK. Early birds in the festival crowd were treated to a magnificent Zip Line display when a professional stunt man who flew down the mountain on the Velocity Zip Line with smoke canisters highlighting the decent, before unclipping from the safety harness and free falling into the beautiful Penrhyn Quarry lake.

The sound of Choir / Cor Penrhyn members both young and old singing Love Hope Strength in the Welsh language along with Mike Peters himself, was a poignant way to begin the musical part of the Zip World Rocks concert. The stage was also graced with great sets by the Storyville Mob and Third Generation (which featured Mike and Jules Peters children – Dylan (14) on guitar and Evan (11) on drums). Third Generation, with their young singer Carwyn Williams (14), were joined for an encore by Mike Peters and Cor Penrhyn Male Voice Choir for a stirring English language rendition of Love Hope and Strength. Cor Penrhyn then gave a magnificent performance of their own, with hymns and arias that seemed to echo the very history of the Quarry itself.

Bethesda band and local heroes, Maffia Mr. Huws (who had once supported The Alarm in Llandudno back in 1985), were next to take the stage and went down a treat with the local Welsh Language community members and others from around the world, some of whom were being exposed to the historic and rugged sound of the Welsh Language for the first time.

Band Pres Llareggub followed, and played a superbly entertaining ‘big band’ instrumental set of popular numbers that carry right across the borders of language and known by all in attendance, it was a fine performance and kept the atmosphere building as the sun began to lower in the sky.

Mike Peters himself took to the stage and was greeted with huge respect and admiration for all he has done in leading 11 previous years of Love Hope Strength Snowdon Rocks events. It was Mike who took the decision to move the walk off the mountain and into the Nant Francon in order to protect the environment of Snowdon itself, and began his ‘solo’ set with a rocking double header of Alarm anthems ‘Marching On’ and ‘Where Were You Hiding When The Storm Broke? – complete with a traditional mass playing card launch. A foot stomping and crowd pleasing ‘Sixty Eight Guns’ followed, before Mike took the festival by surprise and introduced a very special guest in the name of Billy Duffy from The Cult. Billy’s fine electric guitar playing was a perfect compliment to Mike Peters passionate delivery of ‘One Guitar’ which had every hand in the air, and every voice joining in the song.

Gareth ‘Gaz Top’ Jones deserves a special mention for holding the day together from the stage, engaging with a bilingual style that made everyone feel part of the occasion. Gareth was funny when needed and genuinely respectful of the mission and fund raising aspects of the day when called upon. You could also feel his genuine excitement as the event built towards the climax of bringing out one of the great bands of Britsh Music History – Slade.

The sun descended from the sky and the moon shone down as Gareth reeled off their achievements – the first band to ever go straight into the UK charts at Number One. A record breaking run of 16 consecutive hit records…. and then finally, Slade themselves hit the stage and launched into the classic ‘Gudbuy T’Jane’. The hits, the number ones and spelling mistakes all followed – ‘Take Me Bak Ome’, ‘Coz I Luv U’, ‘Mama Weer All Crazee Now’… if you can mis-spell it, they played it. 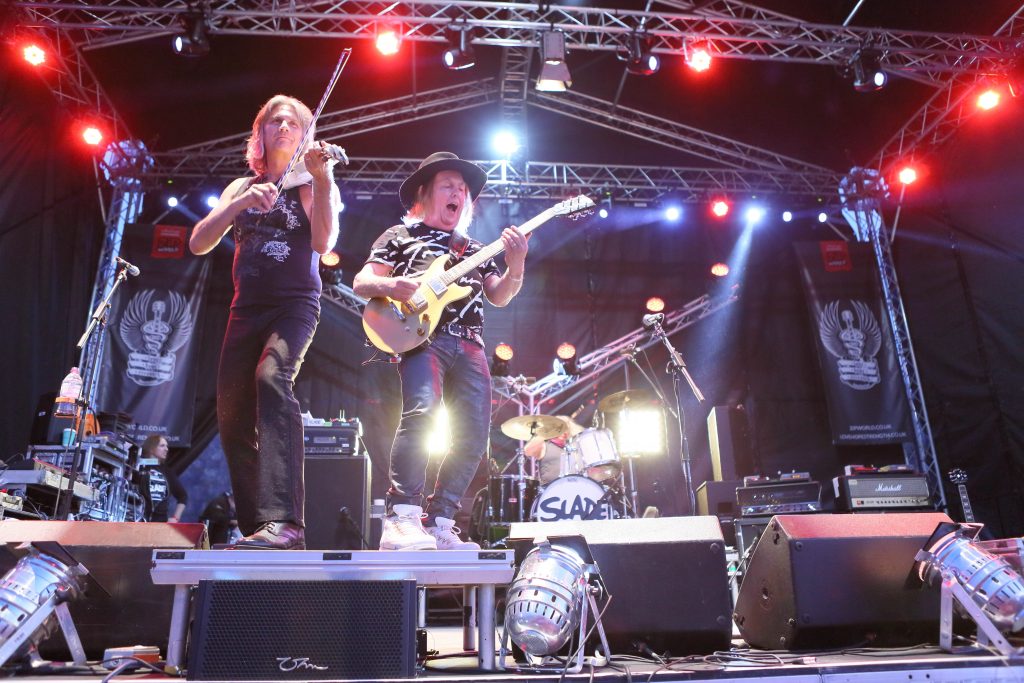 It had been a fantastic day in Snowdonia, and as this incredible Slade concert at Zip World Rocks reached it’s climax, the spirit of the day was encapsulated in the words of one of Slade’s finale songs: 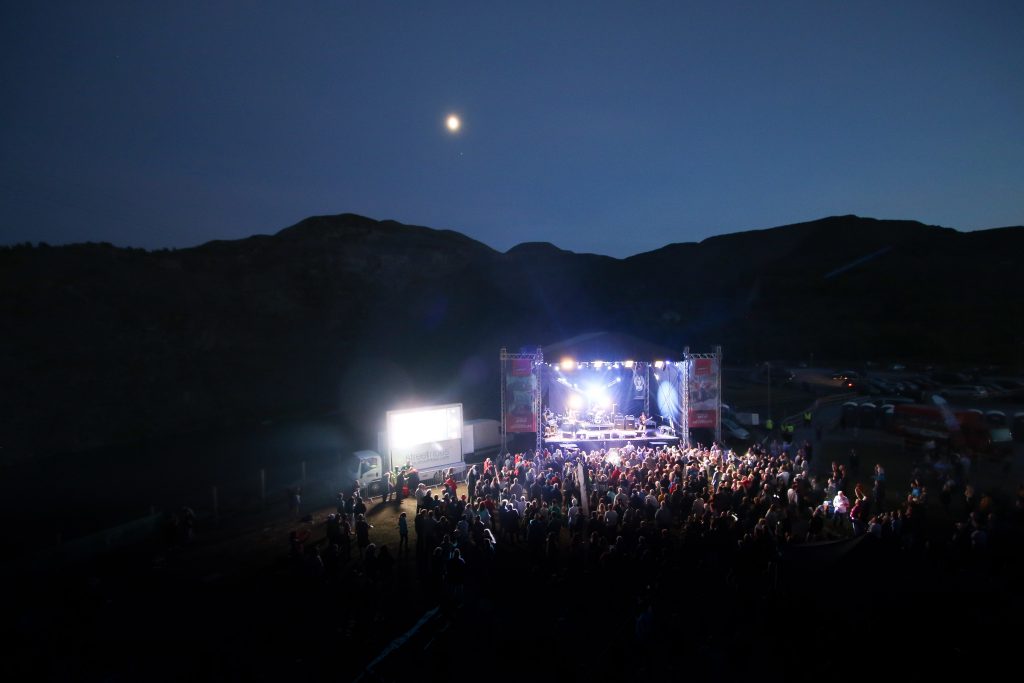