Mike Peters will appear as part of the BBC Wales program ‘C’mon Wales – Our Euro 2016 Singalaong’ that is being recorded live on Thursday June 2nd at Hoddinott Hall, Cardiff.

Mike will be performing two songs associated with the Welsh Soccer team’s historic qualification for this years Euro 2016 Tournament.

Backed by the National Orchestra of Wales, Mike will also be renewing his partnership with master arranger and conductor John Quirk who played such an inspiring role leading the orchestra at last year’s Wales Millennium Centre concert. 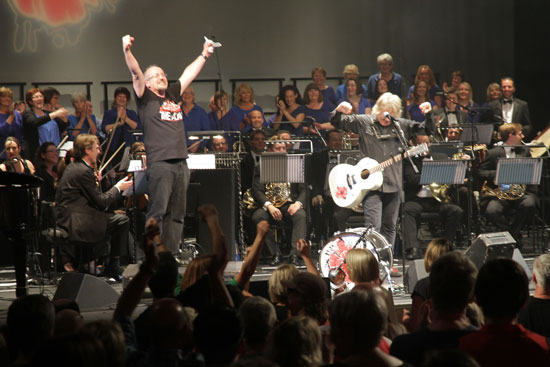 C’mon Wales – Our Euro 2016 Singalaong’  is being presented by BBC Wales football correspondent Rob Phillips who will take the audience on the fantastic journey that saw Wales qualify for a major football tournament for the first time since 1958 while the orchestra, the chorus and Mike Peters of the Alarm, Dionne Bennett from Cardiff band, The Earth and X-Factor star Jay James will perform the fans’ favourites, arranged and conducted by John Quirk.

Welsh football fans have been praised for their vocal support of the team throughout the qualification campaign. Old favourites like ‘Men of Harlech’ and Andy Williams’s ‘Can’t Take My Eyes Off You’ have been sung home and away, along with a host of new songs dedicated to the players like Salt ‘n’ Pepa’s ‘Push It’ (adapted in praise of striker, Hal Robson-Kanu), and Eddie Grant’s ‘Give Me Hope, Joanna’ (sung for Liverpool midfielder Joe Allen). All of these songs will be performed by the orchestra and artists, along with the anthem of the campaign, 90s dance hit ‘Kernkraft 400’ by Zombie Nation..