Who saw the harvest home?

We arrive in Dunfermline at lunchtime and decide to go on a tour of Stuart Adamson / Big Country historic sights (for those who may not know, Big Country is a Scottish band that was born in the city of Dunfermline in 1982). I’m being given a personal tour by none other than Mark Brzezicki drummer and band member since the band played in places like this first place we pass that is currently called ‘Velocity’. When it played host to Big Country on Friday 18th December 1987 it was called the Kinema Ballroom. Here it is both now and then. 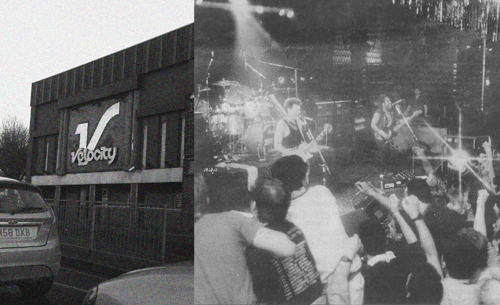 Our next stop is the house on Townhill Road known as ‘Anglepark’ at number 173 to be precise. Mark tells me that Stuart and Bruce often used to walk past this gothic house and got the idea for the song that is currently opening the ‘Crossing Tour’ set. By splitting the original name of the house into two words the song ‘Angle Park’ was also considered as a name for the band prior to settling on ‘Big Country’. 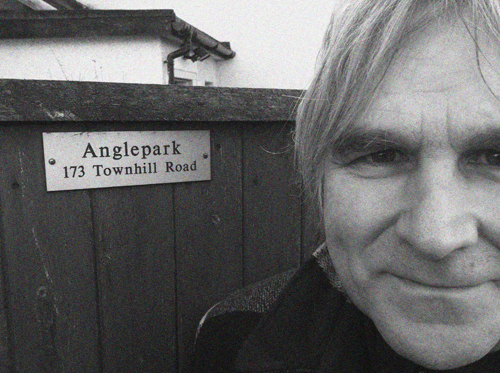 I have to stretch to see over the walls and there’s definitely something eerie about this place that feels a bit out of synch with it’s surroundings, especially with the knowledge of it’s attachment to Big Country. I try to ‘see’ the place as Stuart and Bruce would have seen it in the early eighties, but Mark says the the cracked statues and the fountain that populate the lyric are no longer there even though I hoped they might still be somewhere in the garden undergrowth. I wonder if other images from the song’s lyric are attributable to people who may have lived here or were inspired by passers by. “The evil genius hugs his wife as tiles ring with fear of life”. I find myself asking who was / is that I wonder? 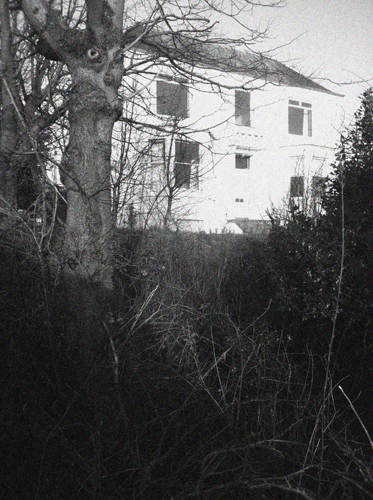 From ‘anglepark’ we drive up into Townhill itself and Mark points out the ‘flat above the chip shop’ that was Stuart’s place when the band began. Again, it’s a place that completely fits with the tones of those early Big Country demos included on the ‘Crossing’ reissue. The grey stone, and the fact that it is an end flat with angles and strangeness all around it, including a weird sign just to the left of the ‘double’ window which is itself a complete miss match to the other ‘quarter’ window to it’s right. One of the old shops is boarded up and the ‘chip shop’ is now a chinese takeaway called the Winner House. Times change, life moves on, and I wonder if the new occupants realise the significance of the music that was written here and probably still echoes between it’s walls. 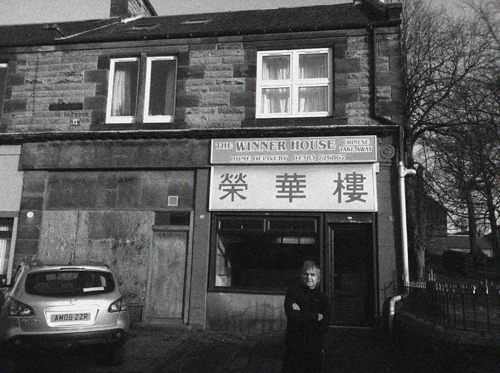 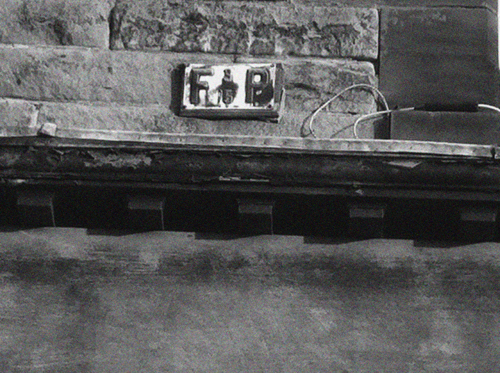 Onwards drives our American friend John, who all BC fans know, and in the words of Mark B, “as the road turns left you’ll see Stuart’s old residence ‘Balmule House’ on the skyline” (I can’t help feeling like I’m in some old Sherlock Holmes movie like the ‘Hound Of The Baskervilles’). This amazing journey just keeps pulling me forward. Mark points out the entrance and we pull into the long driveway. Mark is incredibly disappointed that the original gates Stuart had (forged from iron), with the ‘Crossing’ album ‘compass’ are no longer there. We keep going and going, we have no intention of stopping or turning back now. The light is so beautiful and with the winter sun blinding our view, we pass the front entrance in silence. 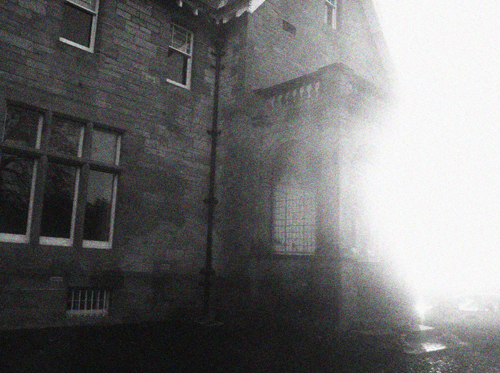 I turn on my film camera to record this moment.

It’s obviously a very moving experience for Mark and so we sit and take in the moment. Eventually, we turn the vehicle around and suddenly we see the outbuilding that Stuart had converted into a studio. More memories come flooding back for Mark, as he remembers the rehearsals for ‘Peace In Our Time’ that took place here. Mark tells of sleeping in freezing cold iron beds and crazy aerobics sessions in the high ceilinged rooms and remembers how the heating was always turned off, all the time he was here. I’m not too sure how I feel at this moment, but as someone who has had to become totally immersed in the music created by the person who once lived here, it’s not hard to feel the essence of the creation that began within not just musically either, but in the sense of life and experience that informed some if not all, of the music that will be performed tonight at the Alhambra Theatre. 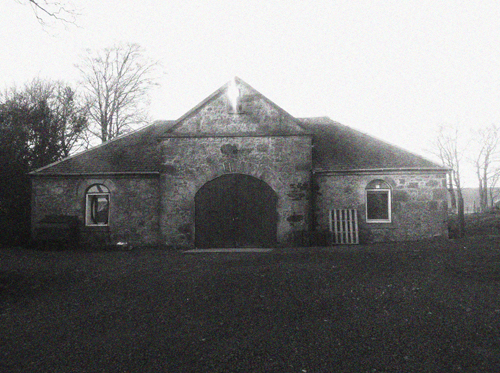 On our way out, we pass what look like new gardens with iron gates but no compasses. Then, in the distance, we spot an opening and more gates. Even as we approach from the driveway, we can see that these are the famous Stuart Adamson ‘Crossing’ gates. Rehoused and refitted in another part of the estate altogether. We leap out of the car and run down to the gates as if expecting to see our old friend. Mark is quite visibly overwhelmed. Finding these treasures in iron, I am reminded of the lines in ‘Porrohman’ “Those once lost have now been found”. I get the feeling Mark is finding a serious amount of solace in this moment and from the look of relief in his face, the feeling that a little piece of his dear friend has been returned to him forever. 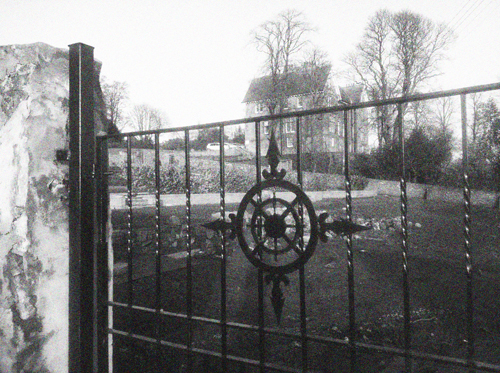 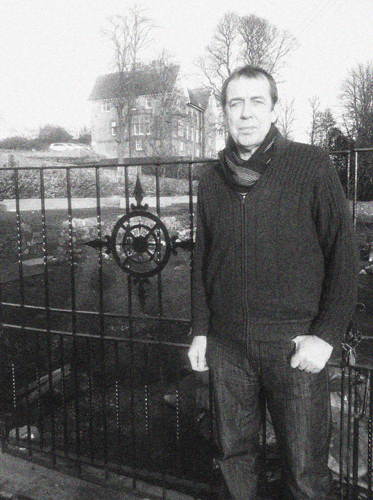 The “compass of decision’ decides that we should head back into Dunfermline and see the place Stuart moved to when he gave up Balmule House and settled back in the city to a large stone built house directly opposite from where Andrew Carnegie was born. 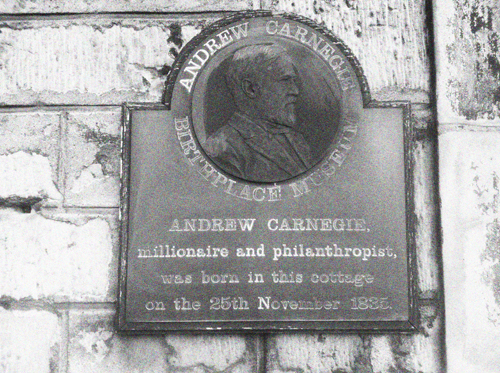 Mark reminisces to the camera about the days gone by that suddenly feel so present.

From here we walk up to Tappie Toories public house (that Stuart ran while he lived in the city). Mark tells of days when he, Tony and Bruce would walk in to see Stuart stood behind the bar pulling pints for the locals, clearing the empties and wiping down the tables. Happy as anything to be in amongst the place and the people he loved so much. For me, this story creates such a strong powerful and contented image of the man I knew, yet is still so out of synch when set against the torment of his last days on earth. 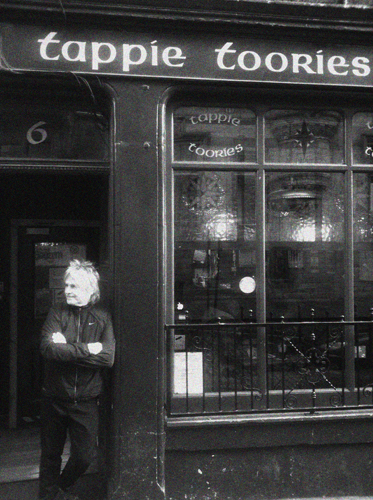 Mark leaves us here and heads for the soundcheck. I can’t resist the temptation to visit the site of Big Country’s first ever gig which was held in the Glen Pavilion in Pittencrieff Park in 1982. 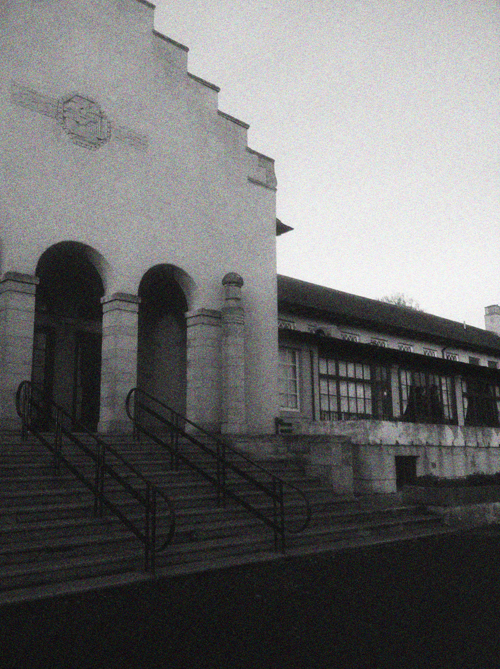 As if by magic, someone has left a side door open and John and I wander in to take a look at the stage where this band called Big Country was born. It’s a large room with a sense of atmosphere and of significance. Most bands start in small rooms in the back of pubs or some such, but Big Country was born in a room full of grandeur. 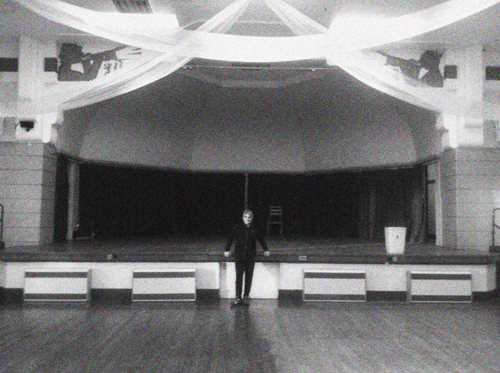 Fittingly and finally, in the shadows cast by the Glen Pavilion when the sun is shining in a certain direction, lies the simple memorial to Stuart Adamson that was sanctioned and paid for by fans. A simple wooden bench with the words of Stuart Adamson etched into it’s construction, stands to the right of a square pond that is today at least, covered in cracked ice with a fountain statue at it’s centre. As I stand and pay my respects in this place of beginnings and endings, I feel proud to be playing my part in the continuity of Big Country and comforted by the words I see before me “Here is strength for us to find, to turn the old to new, and wipe our eyes of misty tears and see the future through”. 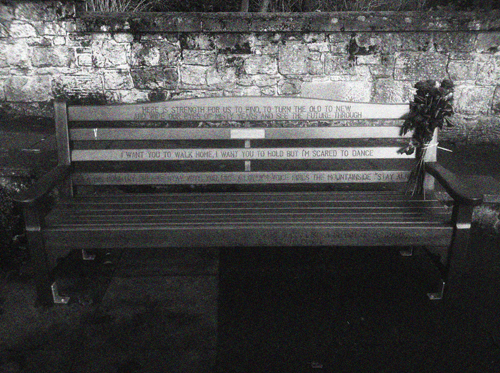 Of course the gig itself at the Alhambra was informed by the days events and the stories of our adventure came forth before the significant and relevant songs. 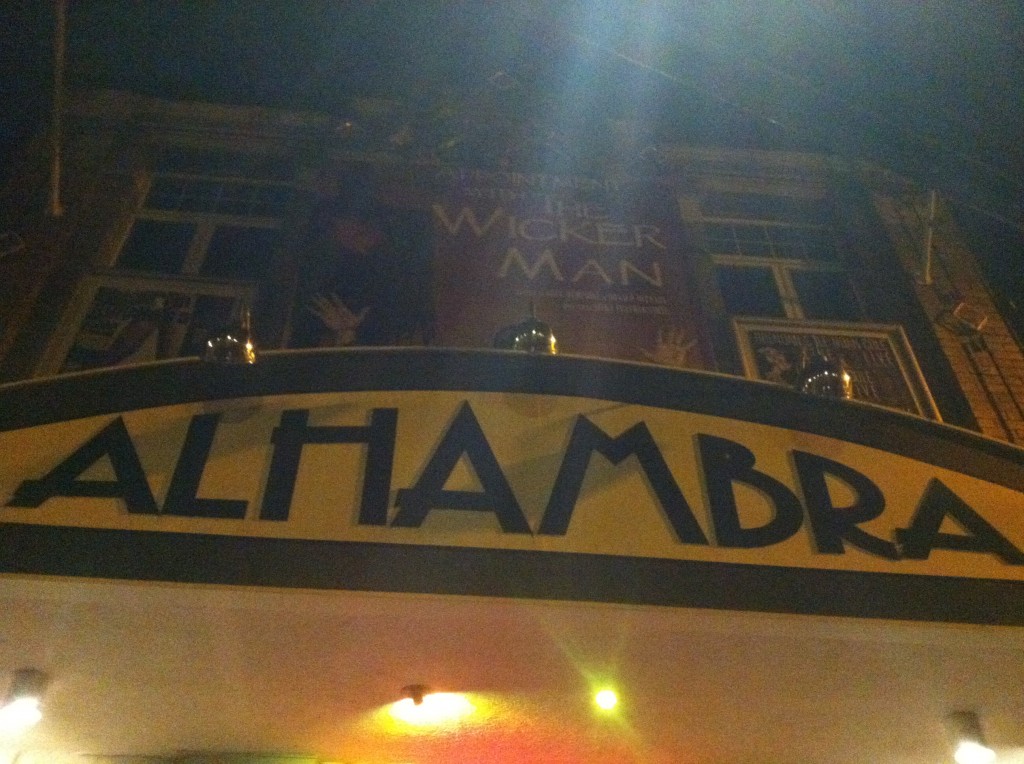 The Dunfermline people welcomed us as returning sons and why not, despite having a Welsh singer now, this band will always and forever be a Dunfermline band. For me and probably because of the day I had just experienced, the most poignant song of the evening was ‘Close Action’, especially in the words ‘I will carry you home with the God’s in my eyes”. We finish as one, arms aloft, Stay Alive. 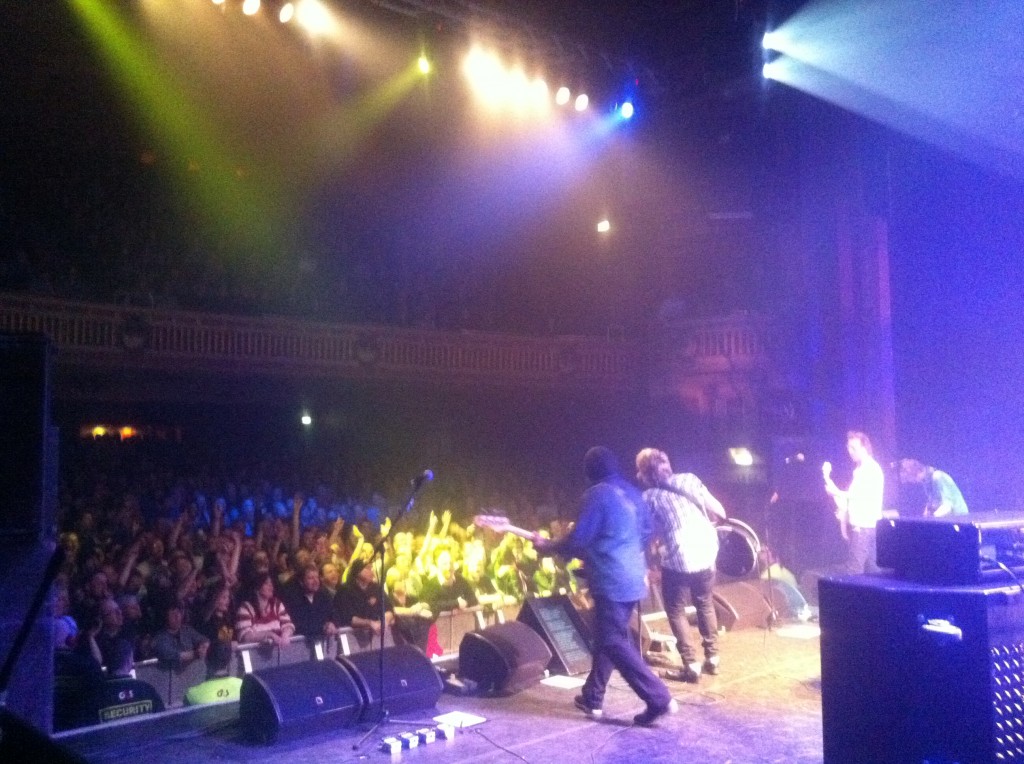